Home What’s on Heritage Open Days – A Snapshot in Time 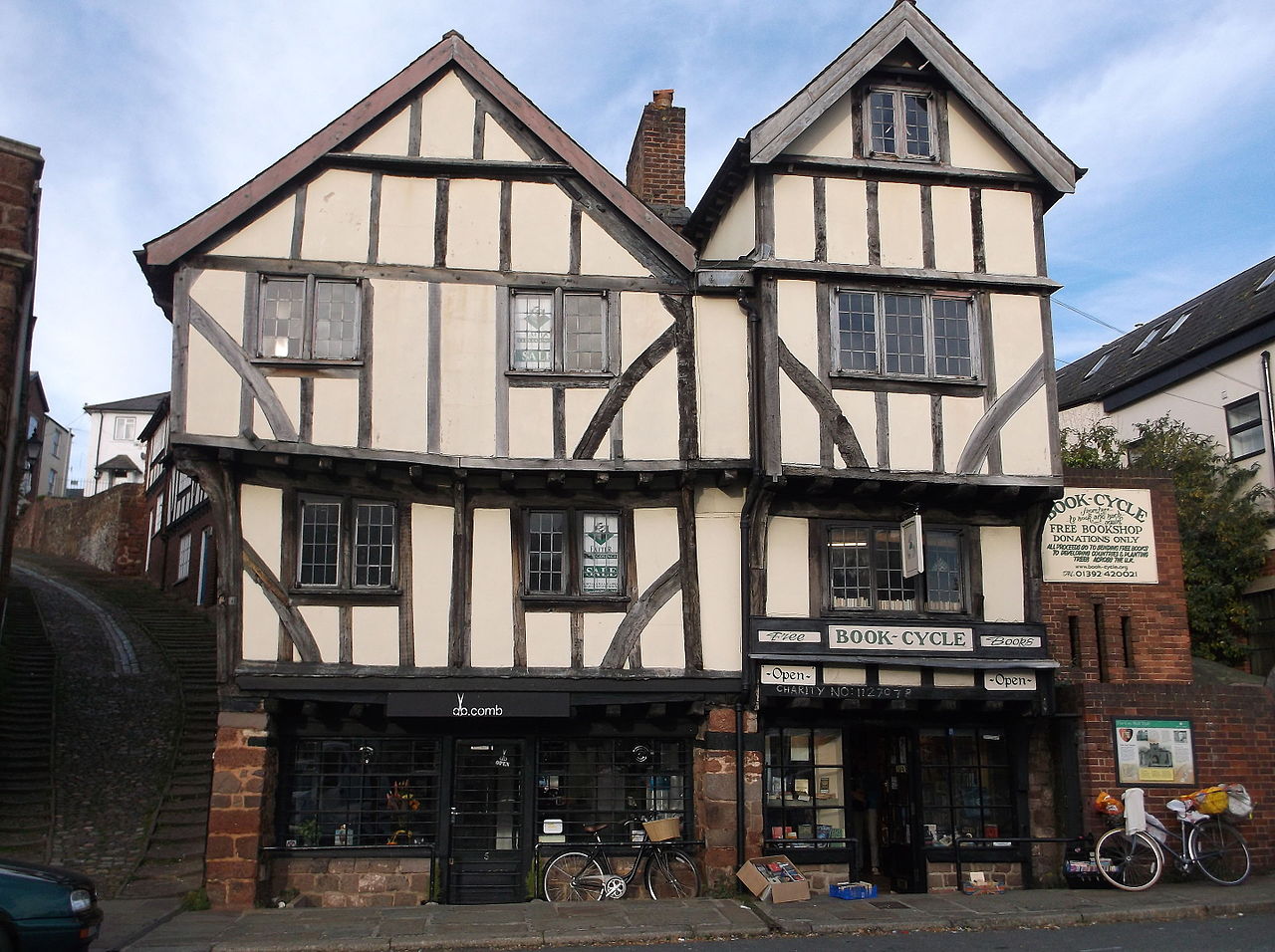 Near Exeter city centre between South Street and the River Exe is an area of Exeter called the West Quarter. Prior to 1930 this area was  ‘home to a large poverty stricken artisan and labouring class’ living in decaying housing and tenements often with large families living in a couple of rooms with toilets shared with other tenants. The area had a reputation for social problems and petty crime.  During the 1920s the City Council developed a rebuilding plan and gradually cleared the area in the 1930s and 40s and moved the people to new housing including Burnthouse Lane on the outskirts of the city 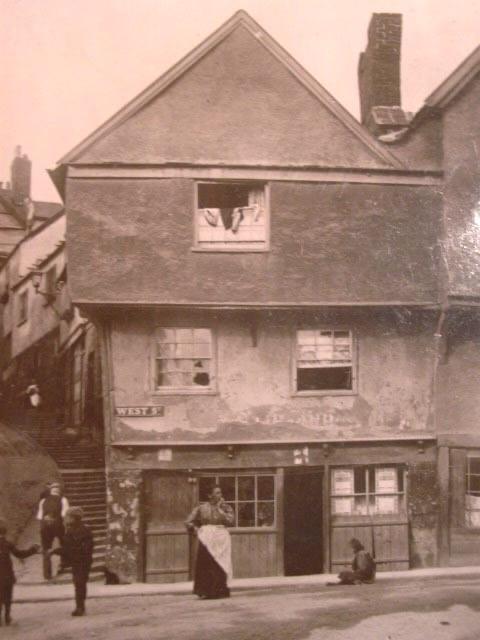 Despite being considered a slum, the West Quarter was architecturally an ancient part of the city and fortunately two 15th century timber framed houses nos 5 and 7 West Street (originally 11 and 12)  survived the clearance and can be seen today.  They lie at the bottom of Stepcote Hill, opposite St Mary Steps Church.  Stepcote Hill was the original route into the city from the river through West Gate (now marked by a plaque on the remaining part of the City wall).   A report from the Society for the Protection of Ancient Buildings on the West Quarter in 1928 described number 5 as “ ..exceptional … because it is a more perfect example of medieval building than any other on the site”.  The ground floor walls of number 5 are thought to have been of stone which was later replaced to make a shop front – the removal was believed to have led to some of the serious structural issues.   “The ground floor was originally taken up by a small shop with a large kitchen behind: there was a first floor hall (or principal living room), and probably two chambers on the top floor.  There was a fireplace in the rear wall on each floor with a staircase in the north rear corner”. 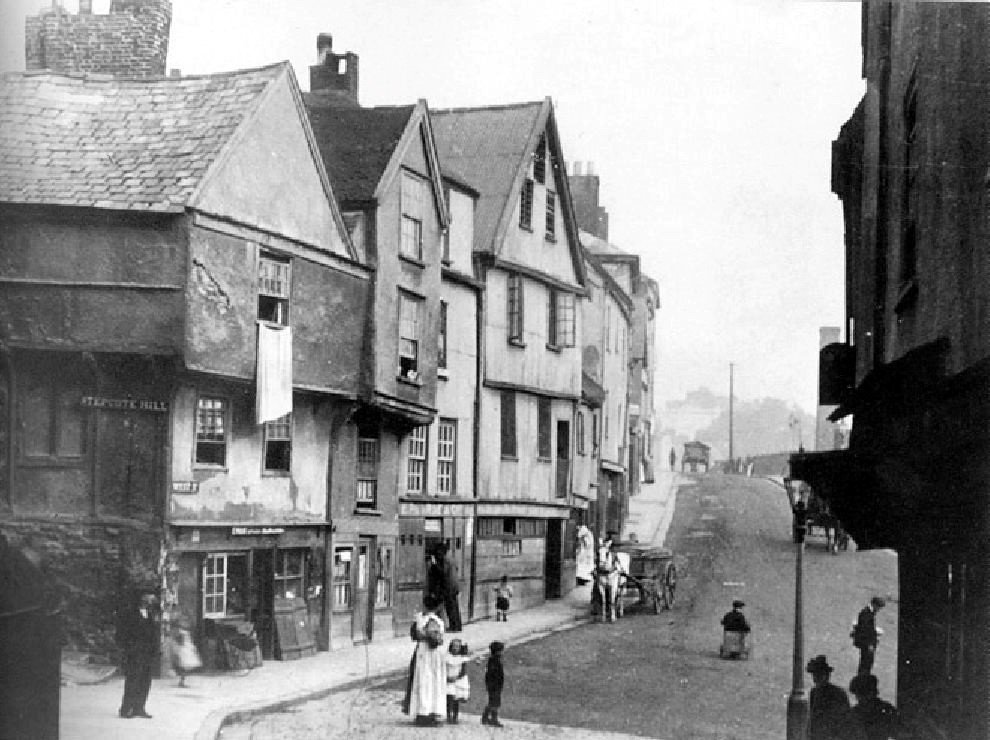 However when surveyed in 1928 both houses had been divided up with partitions to create several rooms on each floor, and were in a very bad state of structural repair with rotten floor boards and roofs and with rain soaking through the corner of number 5. They were damp with cracked fireplaces and the toilet and sink were out of order.  The 2nd floor of number 12 was more than 18” out of level.  The City Architect’s drawings are shown below. 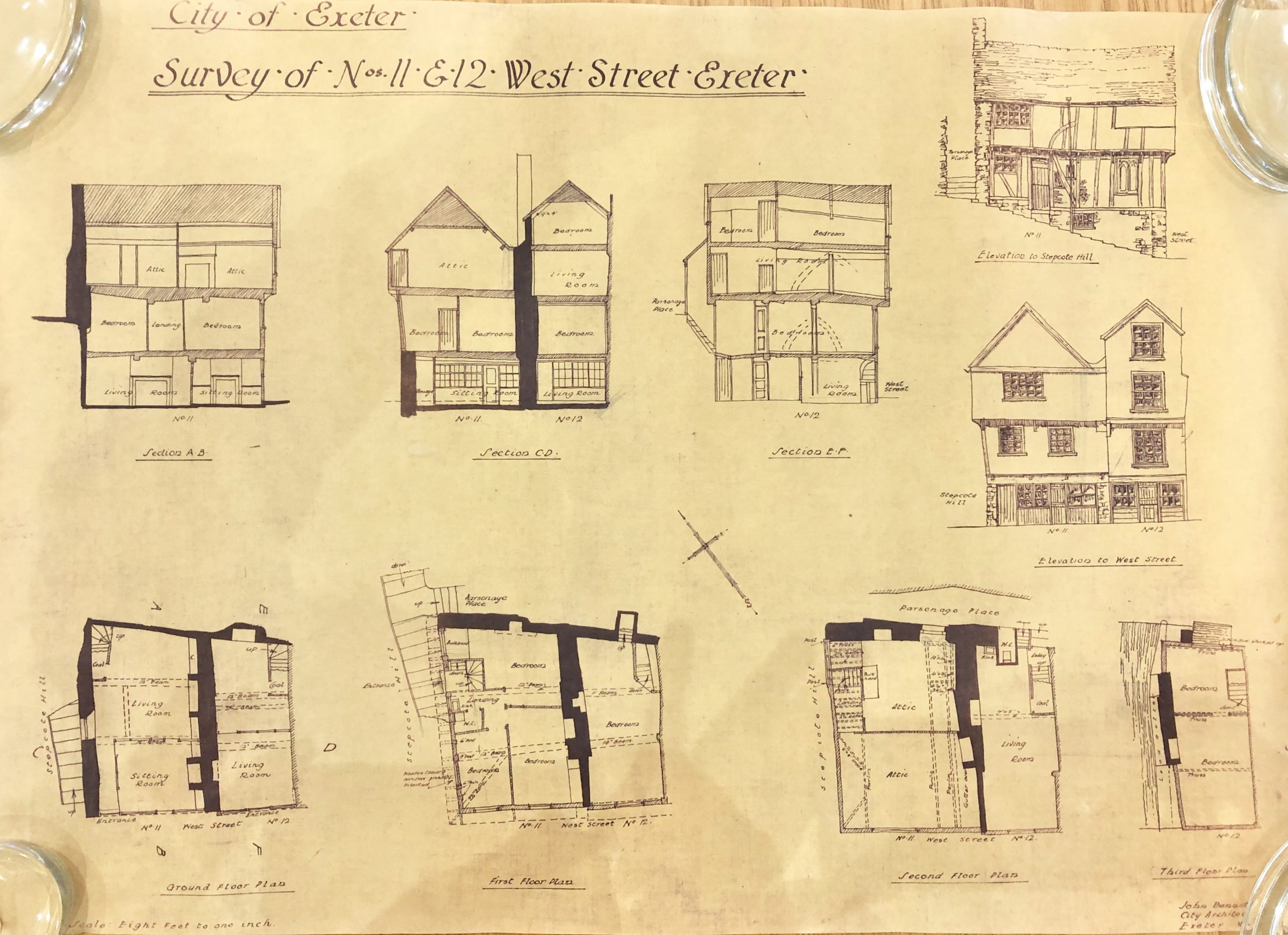 In these awful conditions two large families were trying to survive – the Frankums in number 5 and the Chanters in number 7.

In 1928 William Frankum was 50 and his wife Beatrice 43. They had six children aged from 15 to 24.  William was a farm labourer and council records show a total family income of £5 a week. The weekly rent was £7s 6d plus rates.  In 1913 William had joined the army for short service in the Inland Water Transport Corps Royal Engineers. He was eventually awarded the British War and Victory medal with a disability pension and was discharged in March 1919.

At the age of 19 the eldest son, William Henry, sailed on the SS Montcalm from Liverpool to the USA via Canada as an immigrant third class. However he was deported (reason unknown) in 1927 returning to England via the Canadian ship “Montreal”.  The most colourful member of the family was a younger son, Albert, who spent four years in a reformatory and was often unemployed. He was a regular rabbit poacher often assisted by his friends and brothers. In 1928 he was fined for poaching rabbits with nets and a ferret at Ford Farm, Newton St Cyres. When accosted he complained “It’s a bad job if we can’t catch a rabbit for ourselves and out of work too”.

The neighbours at number 7 were William Chanter, 45, an unemployed labourer, his wife Amelia, 44 and their children aged 20, 17, 13, and 5, (two others had died very young). Susan Chanter, William’s widowed mother, aged 83 also lived in the house. Their weekly income was about £1 5s per week, their rent 3s 6d plus rates.    In 1916 William enlisted for short service in the Devonshire Regiment and was assigned to the Devonshire Royal Defence Corps 24th Protection Company. He was discharged in 1917 as no longer physically fit for war service.

The Chanters seem to have had a very sad life – William and Amelia were prosecuted by NSPCC in 1913 for neglecting their three young children. The inspector reported that the children were dirty and verminous and the mother drunk.  William Chanter told the inspector he kept his mother with them so as to keep her out of the workhouse but Amelia said she would get on better if the mother in law left. In a later prosecution the inspector said that Amelia was addicted to drink and William said that he could not get his wife “to keep the place in order”. Eventually the magistrates sent the parents to gaol for two months with hard labour and the children were sent to the workhouse. By 1928 they were reunited and living in number 7 West Street. 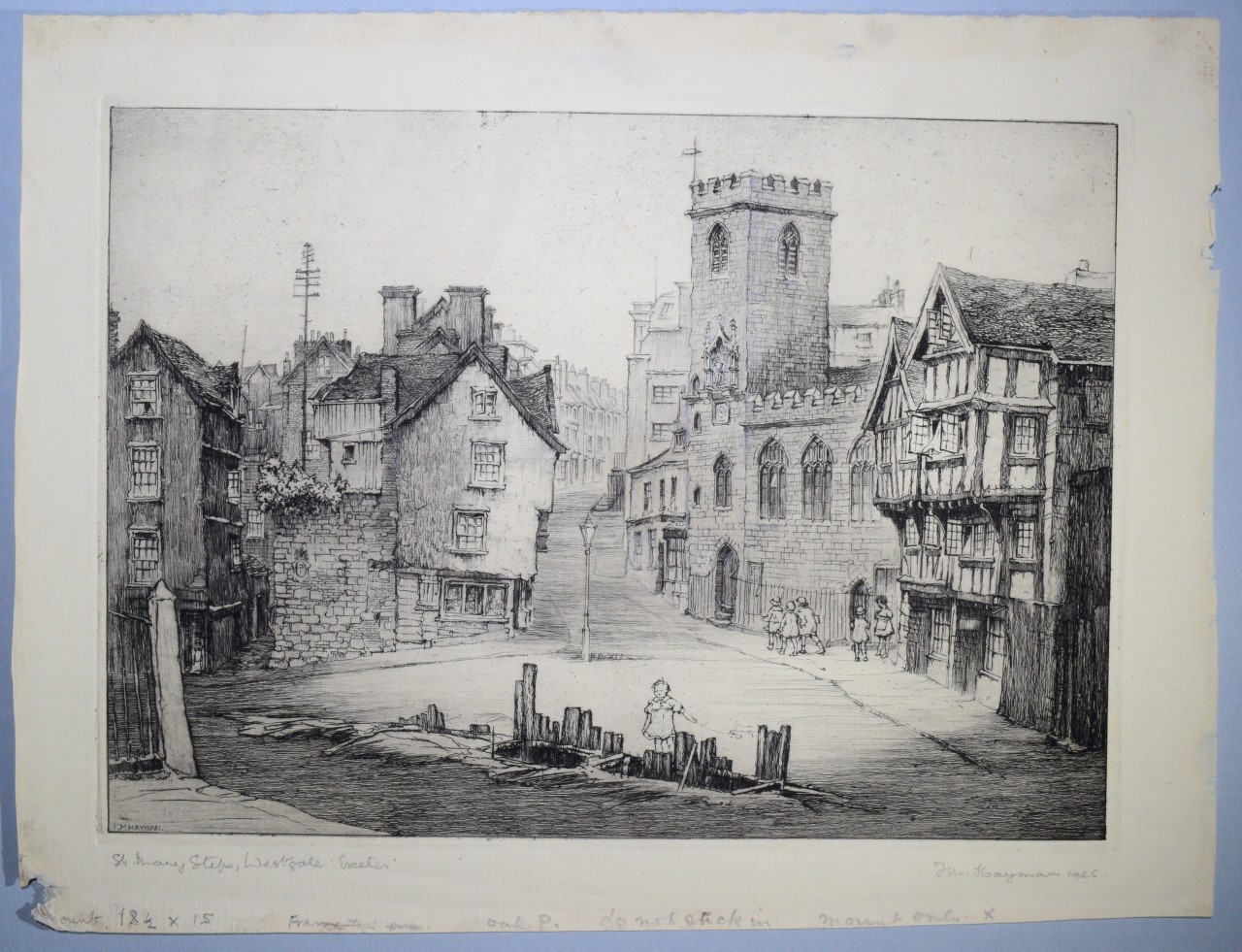 In 1930 the families left these ancient houses and the city architect finally renovated the properties.  It is not known what happened to the occupants immediately afterwards, although there is evidence that the Frankum family stayed and flourished in Exeter.  In 1945 Frances Hayman, a local artist, made an etching of the renovated houses showing the still dilapidated state of the surrounding area.

At one time it was suggested that one of  the houses could be used as a museum for the history of the West Quarter but today both are privately occupied, and have shops on the ground floor.

Posted in Library Collections, News by Erno on September 9th, 2020.