Home What’s on Book of the Month: David Gregory and Euclid

Book of the Month: David Gregory and Euclid

September’s Book of the Month blog was written by Edward Maunder, Library Volunteer at the Devon and Exeter Institution.

The Devon and Exeter Institution published in a newsletter in 2021 a note that a copy (1 out of 250) of David Gregory’s commentary on Euclid’s works (Euclidis quae supersunt omnia, Oxford University, 1703) needed to be rescued. This blog principally concerns the life of Gregory, but it is of interest to consider also a little of the history of the translations of Euclid’s Elements originally written in (ancient) Greek in the second century B.C. i.e. some 1000 years before Gregory’s commentary. 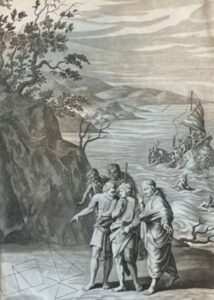 The commentary includes an introductory engraving designed by Michael Burghers. The scene shows a group of men, apparently shipwrecked, standing on the shore, as one of them points to some triangles and other geometrical figures drawn in the sand, oblivious to the agonies of the shipwreck still in progress. This illustrates a passage from Vitruvius, the ancient Roman architect, who recounted a story about Aristippus, who was shipwrecked with his companions on the island of Rhodes. But he spied some triangles in the sand, and said to his friends: Bene speremus, hominum enim vestigia video – “Cheer up, for I see the vestiges of mankind.” 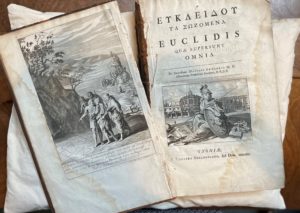 The Elements had a huge impact on Islamic mathematics, and were first translated into Arabic in the ninth century AD. This was followed by translations into Latin, “modern” Greek, and English, particularly in the sixteenth century AD. The first English translation appears to be due to Sir Henry Billingsley (1570), a haberdasher and one time Lord Mayor of the City of London. Gregory’s translation and commentary of Euclid’s complete works later appeared in both Greek and Latin in 1703, although it appears that the first translation into modern Greek had to wait until 1820!

Gregory was a contemporary of Newton, Hooke, and Wren. He was born in Aberdeen on June 3, 1659, the 4th of 15 children by his father’s second marriage (his father fathered 29 children in all!). After studying at Aberdeen University, the family left Scotland to avoid religious discrimination as Jacobites. Gregory undertook what we might call a Grand European tour and returned to Edinburgh in 1683, where he received his MA and was appointed to a Chair of Mathematics at the age of 24.

Gregory was an excellent mathematician, and he became first a correspondent and then an acquaintance of Isaac Newton. Gregory showed Newton a model of a cannon invented by his father, but Newton “advocated the suppression of the invention as being destructive of the human species”.

In 1691, with some influence from Newton, he became the Savilian Professor of Astronomy at Oxford University, and a Fellow of the Royal Society. At Oxford he developed a reputation as a teacher, and was interested in the reform of mathematics teaching – suggesting that teaching be in English rather than Latin. One wonders why he didn’t follow that suggestion in translating and commenting on the works of Euclid! His predecessor in the Savilian chair, Edward Bernard, had initiated a project of new editions of ancient mathematical works, and Gregory edited a folio volume of Euclid’s works in Greek and Latin.

He married in 1695, aged 36, to Elizabeth Oliphant, with whom he had 9 children, but only 2 survived beyond childhood. In 1697 he published a paper at the Royal Society describing the mathematical shape of a catenary (a curve followed by a hanging flexible line or chain). This was relevant to the stability of masonry arch bridges as realised by Hooke in 1676: “As hangs the flexible line, so, but inverted will stand the rigid arch”. Furthermore, this paper is referred to and applied to various forms of construction in Samuel Ware’s book of 1809. So, one may argue that Gregory was not only a mathematician and an astronomer, but a structural engineer.

Following the publication of his book in 1703, it seems that Gregory’s health became poor, and in 1708 he visited Bath so that he might be cured. Upon learning that his only daughter was ill with smallpox, he hastened to return to London after less than a week in Bath. But being ill himself, he was forced to stop at Maidenhead, where he sent for his friend Dr John Arbuthnot to attend him. Gregory died soon after Arbuthnot’s arrival, on 10 October 1708 at The Greyhound Inn in Maidenhead. His daughter had meanwhile died of smallpox, and three of his sons were also ill. 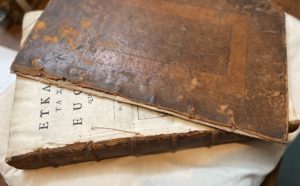 In 2022, three people donated money to the DEI’s ‘Rescue a Book’ scheme, to pay for conservation work on this book.

Posted in Book of the month, Library Collections, News by Sonia Llewellyn on September 2nd, 2022.

It was great to be @exeter_connect Volunteer Fayre this morning, chatting with lots of potential volunteers! If you… https://t.co/wQJHAD2BkP
29 September 2022

Cathedral Close is full of hidden treasures. #DidYouKnow that our neighbour, 8. Cathedral Close, is home to a rare… https://t.co/0OiCQcHp4U
27 September 2022

Our wonderful member and colleague, Emma Laws, is giving this very special talk. Do grab a ticket… https://t.co/01pq2Ynu9N
22 September 2022

💡It's time for some FREE family fun! Celebrate Heritage Open Days 2022 with our Bookworms, discover Astounding In… https://t.co/KfQckaLi5D
14 September 2022