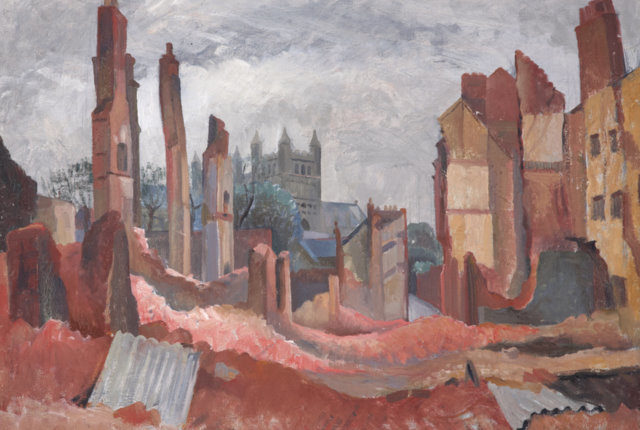 Exeter’s lost streets; news from the West Quarter in the 1920s Research Group

Sun Street, sometimes described as one of Exeter’s forgotten streets, was a narrow, primarily commercial street leading from South Street to the Lower Market and Corn Exchange. During the early decades of the 20th century, some of its businesses were aimed at the farmers who came into market: a corn and seed merchant, a cooper and a saddler, for example. There were also grocers, a greengrocer, a barber and a bootmaker.

One or two of the properties served as warehouses for the South Street shops or businesses in the market. Towards the western end of the street was Black Lions’ Yard, which housed the town centre parcels depot for the Great Western Railway. There was also an old pub, the Sun Inn, which closed in 1917. Most businesses had residential accommodation on the upper floors, let out as lodgings. Only eight of the twenty-five properties were fully residential and only three of these were lived in by a single family.

Sun street was destroyed in the Blitz as Woollatt’s painting, in RAMM’s collection, graphically illustrates. No photograph of the entire street is known to exist, but amongst the families who lived there in the 1920s, images do survive. 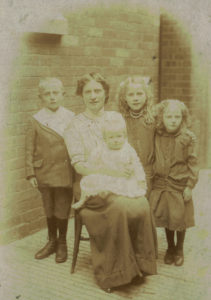 The Spicer family lived at number 23 for thirty years until their home was destroyed. Maud Spicer was a local West Quarter woman, but her husband Edwin came to Exeter with the Royal Field Artillery having survived the siege of Ladysmith. Edwin was able to capitalise on skills acquired in the army to become one of the first domestic chauffeurs in Exeter, working for several local doctors. Maud supplemented their income through informal money lending or pawnbroking, within the community she knew so well. This activity led to her being accused of handling stolen goods in 1923, but the charge was dropped.

The couple had five children, Ed junior, Florrie, Vera, Hilda and Len. When the First World War broke out, Edwin volunteered at the age of thirty-eight, serving as a stretcher bearer and later driving field ambulances in France. It is thought that this photo of Maud and the children, believed to be taken in the back yard of their house in Sun Street, was commissioned for Edwin to take with him to War.

Edwin returned to Sun Street in the 1920s and worked as a butler at the Chorister School, however, the War had taken a toll on his health and he died in 1927. All mementos of Edwin were lost in the destruction of Sun Street, but this photograph of the family survived, because it was taken to the Burnthouse Lane Estate in the 1930s by his eldest son, Ed, as part of the move to rehouse West Quarter families.

As the Research Group continues to interrogate life in the West Quarter in the 1920s, many interesting stories are emerging to illuminate some of the forgotten streets of Exeter.

Exeter’s lost streets, news from the West Quarter in the 1920s Research Group