William Beckford (1760-1844) was an English novelist and travel writer, best known for his Gothic novel, Vathek (1786), and for building the magnificent (but structurally unsound) Fonthill Abbey in Wiltshire.  Beckford was an art collector and hugely wealthy; he was also a great traveller. 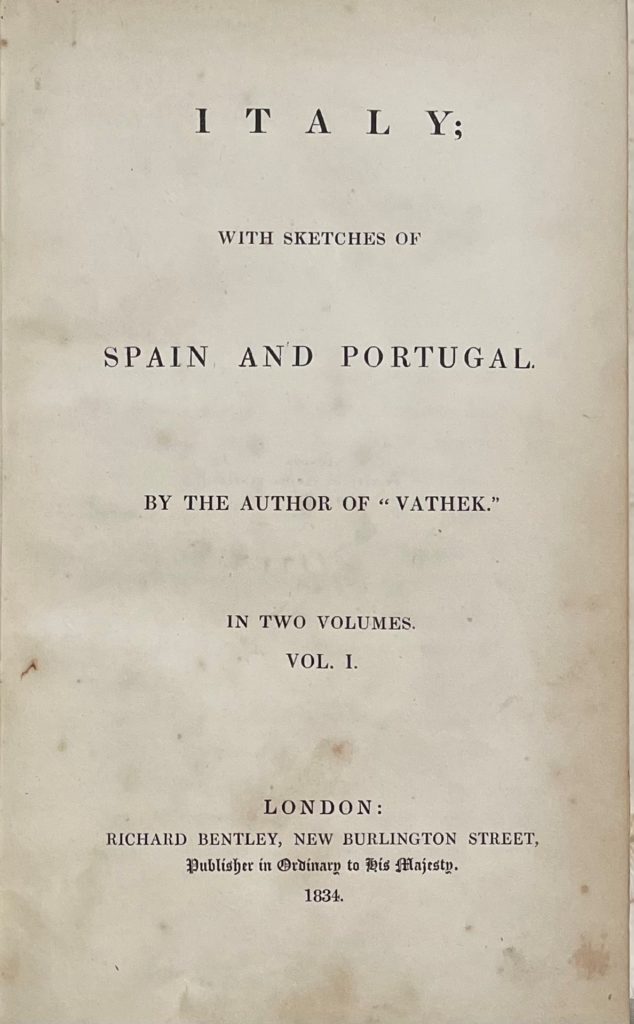 In 1782, Beckford travelled to Italy and wrote about the countries he visited in a series of letters, eventually published as Italy with sketches of Spain and Portugal in 1834.   His observations of local customs and manners are brilliant:

You can have no idea how many strange, amusing fancies played around me whilst I wandered along; nor how delighted I was with the novelty of my situation.  But a few days ago, thought I within myself, I was in the midst of all the tumult and uproar of London: now, as if by some magic influence, I am transported to a city [Antwerp] equally remarkable indeed for streets and edifices, but whose inhabitants seem cast into a profound repost. What a pity that we cannot borrow some small share of this soporific disposition! It would temper that restless spirit which throws us sometimes into such dreadful convulsions.

In 1784, Beckford would be forced to travel once more to Europe, this time with a one-way ticket in the wake of his affair with William ‘Kitty’ Courtenay of Powderham Castle.  Beckford had met Courtenay on an early visit to Devon when he was just eighteen years old and, following his subsequent Grand Tour of Europe, he returned to England, and to Powderham Castle, in 1784.  Letters containing evidence of their love affair were intercepted by Courtenay’s uncle and leaked to the press.  Since homosexuality was still punishable by death, both Beckford and Courtenay had little choice but to self-exile.  Beckford and his wife escaped to Europe and, sadly, although he returned to England in 1795, Beckford was treated as a social outcast for the remainder of his life.   Courtenay retreated to a house on the Hudson River in New York before moving to France; his former townhouse at no 7 Cathedral Close was repurposed for the Devon and Exeter Institution in 1814.

The Institution’s copy of Beckford’s account of his travels to Italy was an early acquisition and it remains an important piece of the story of the Institution.