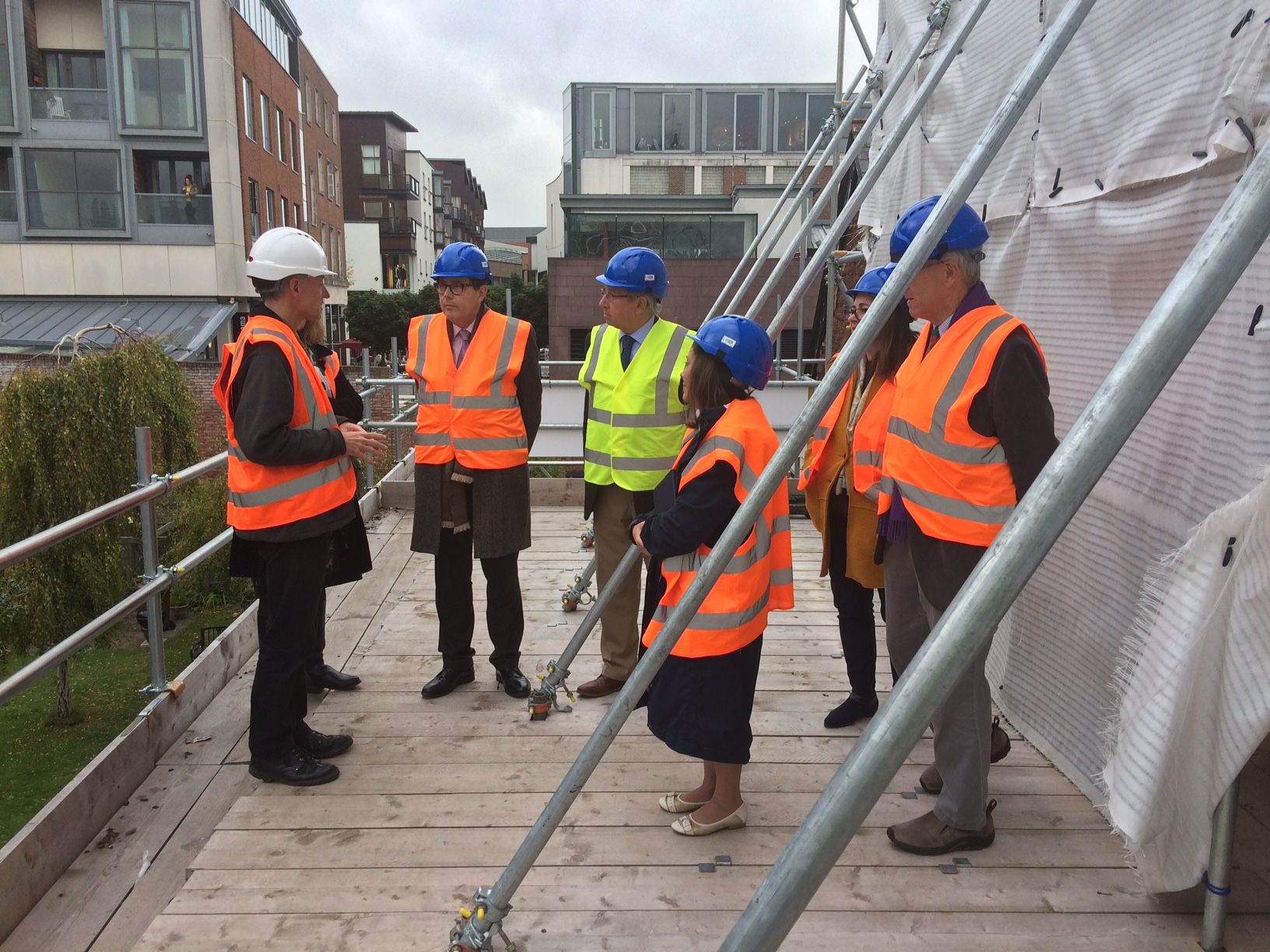 In the hallway of the Devon and Exeter Institution  we put on high viz vests and hard hats and climb up a steep metal staircase at the side of the building.

Fig 1 shows a roof tour in progress and Princesshay behind.

Once on the roof we enter a vast scaffolded tent, below which our roof is being taken apart and put back together again.

In the winter of 2012 following a heavy snowfall, our Housekeeper Stephanie found small pools of water in the libraries.   What seemed to be cracks in the plaster-work began to appear in the ceilings.  When investigated by a structural engineer, it was found that the ceilings had dropped five inches due to cracks in the main timbers supporting the ‘cupolas’ – the domed skylights above each library.

Eight scaffold towers were immediately erected to prevent a catastrophic failure of the roof and a long campaign of fundraising began to raise the one million pounds needed to investigate and rectify the Institution roof.

An archaeological survey in 2015 found that the timber structures of the walls, ceilings and roofs of the existing libraries were all made of reused timbers which have many redundant sockets, mortises and peg-holes, indicating that that they formerly formed part of a very different structure.

Fig 2 shows the scaffolding being erected in the Outer Library with members still reading beneath! 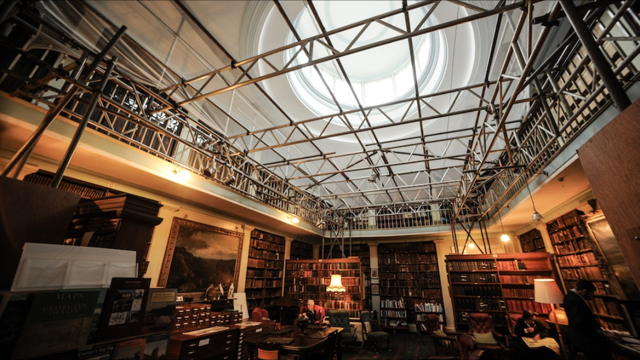 It is highly likely that these timbers were reclaimed from the parts of the building which had been constructed pre 1800 and that the timbers were reused here to save on the costs of acquiring and transporting new material to the site.    Only three Medieval timbers were observed and it must be assumed that, apart from the surviving timber elements in the rear wing of the house, the timber structures of the Medieval house have been lost.

Examination of the Institution’s archive revealed that the distortion of the ceiling within both libraries had been evident since its original construction and throughout the 20th Century when ad-hoc remedial repairs had been undertaken in almost every decade.

Following an extensive survey and evaluation of the building fabric by conservation accredited Structural Engineers, Mann Williams and Conservation Architect Simon Cartlidge, it was agreed that the only practicable solution was to strip existing roof coverings to access the primary roof structure.   This enabled a temporary stabilisation of the roof while a more informed and considered restoration was planned. 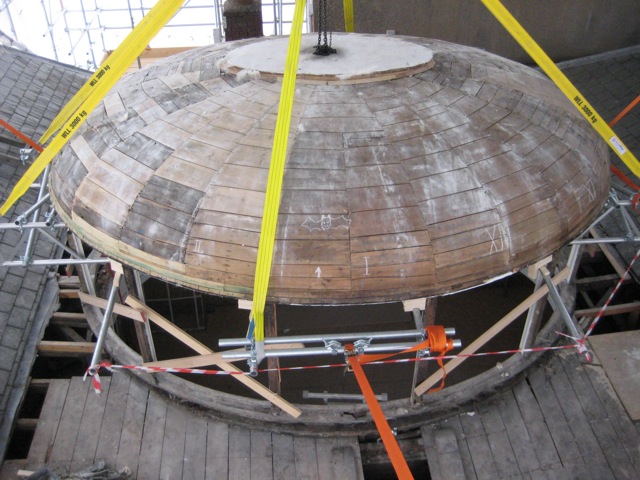 This is what we can see before us as we stand beneath the tent.  The roof has been sripped back to its skeleton and both cuploas have been hoisted into the air to remove weight from the roof.     We also note the surprise discovery of a mummified rat (nicknamed Rufus) in one of the roof cavities!

Fig 3 shows the cupola of the Inner library being hoisted into the air.

The restoration which was conducted by Carrek building contractors under site Manager Chris Davey, involved the templating of manufactured steel to encase the failed timbers and hold them in a fixed position. 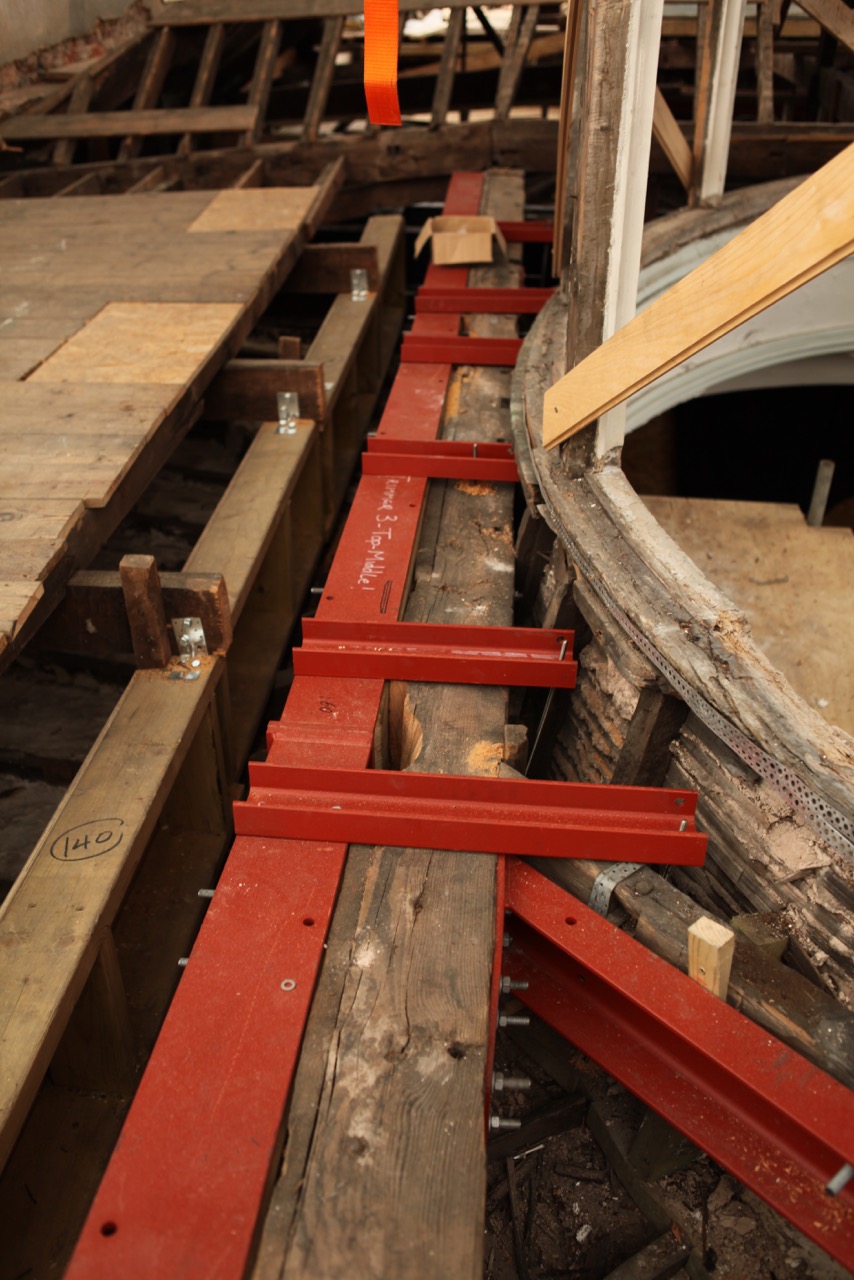 The roof was reconstructed over the new steel skeleton, reusing the original materials where possible.   The heavy lead cladding added in the 20th Century was replaced with the original copper, returning the roof to its 1813 splendor.

Fig 4 shows the red steel encasing the timbers to hold them in place.

The Institution remained open throughout the restoration.

This restoration was funded by Historic England, The Heritage Lottery Fund and by the contributions of many of our members and small grant making trusts.

The building was formally reopened by The Earl of Devon in spring 2017.

A short film about our project can be found on the Development page.

Thank you for taking our tour and we hope to welcome you back to the Institution again soon.

Posted in News, Workshops and Events by Erno on April 8th, 2020.