Join us on our usual Wednesday tour - reading the history of our building, from the walls, as you can see it today

For this week’s virtual tour I thought we’d take you through what you can see if you walk past the building today, namely the beautiful exterior of our building in Cathedral Close.  That may not sound like the most interesting topic, but the facade of the Institution reveals plenty about it’s 600 year history. 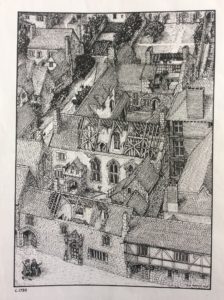 The building was constructed early in the 13th century and, like all the buildings in the Close, was initially owned by the Cathedral which was approaching completion.  It is built from Heavitree Breccia stone, a local, rather coarse, sandstone with a rich red colouring.  The building you see from Cathedral Green is the original medieval gatehouse of what was a double courtyard property. The gatehouse would not have looked quite as it does now (see fig 1).  If you look closely at the walls you will see plenty of infilling brick and old wooden lintels where the original windows would have been (these are clearer in fig. 2).

In 1672 No. 7 Cathedral Close became the town house for the Courtenay family, the Earls of Devon, who altered and developed the property during their ownership.  The 3rd Viscount William Courtenay had a particular passion for developing and remodelling, including the construction of the Music Room at Powderham Castle. His development of No. 7 included building within the first courtyard, installing larger windows to the front of the property and rendering the facade in the style of the times. William Courtenay, known as ‘Kitty’, was exiled for being a homosexual and the building fell vacant.

When the Institution took over the property in 1814 they set about making it suitable for purpose, installing two beautiful galleried Georgian libraries, with their iconic cupolas or lantern roofs, within the medieval framework of the double courtyard.  The little lantern visible from Cathedral Green was also installed on the roof of what is now the Reading Room. 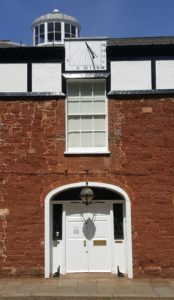 The sundial was installed with the original development in 1814.  We often get questions about the sundial as visitors note the hour numerals start at 10.00am (X) on the left, then follow round to 8.00pm (VIII) on the right.  This is because the alignment of the building means the sun doesn’t reach the front of the building until after 9.00am  and is gone again before 9.00pm.  The gnomon (or pointy bit) on a vertical sundial is set to point true north by aiming at the Pole Star.

In 1846 the roof height of the Reading Rooms on the first floor was raised to give more light and an airier feel to these rooms, the line of which ran just above the first floor windows.  A few years after the Institution finally purchased the freehold of No. 7 in 1908, the rendered facade was removed and I suspect the top section was left rendered (or re-rendered) to cover the roof-raising work, and the faux Tudor strip, now incorporating the top line of the windows, was created.

Fig. 2 shows the facade in more detail and you will see the original window lintels, infilled brickwork around the windows, the sundial, small roof lantern and the faux Tudor section covering the altered roof height.