Home What’s on Ponds in the Parlour: the invention of the seawater aquarium

Ponds in the Parlour: the invention of the seawater aquarium

Philip Henry Gosse's invention of the aquarium was 'instantly accepted by naturalists and amateurs alike, and became to the one a portable studio of biology, to the others a charming and fashionable toy'.

On 3 May 1852, the marine biologist and naturalist, Philip Henry Gosse (1810-1888), made his first serious attempt to create a marine aquarium; his objective – ‘to make us acquainted with the strange creatures of the sea, without diving to gaze on them’.

‘he had put about three pints of sea-water, with some marine plants and animals, into a confectioner’s show-glass, which was about ten inches deep by five and a half inches wide… Without changing the water otherwise than by adding a little to supply loss from evaporation, this vase was kept fresh, and its contents healthy, for more than two months … The principle … upon which the preservation of marine animals in captivity could be maintained was now discovered, and it was merely a question how to bring it to perfection in practice.’ (Edmund Gosse, The Life of Sir Philip Henry Gosse, 1890)

Gosse had been staying with his family in Devon – from January in the village of St. Marychurch, a mile outside Torquay in south Devon, and from April in Ilfracombe on the north Devon coast. He spent day after day gathering marine specimens to collect, identify and illustrate; when the tide was out, he discovered numerous beautiful anemones at the low water mark – ‘Every haul of the dredge was an excitement and a delight.’

In a biography of his father, published in 1890, Edmund Gosse explained that by allowing weeds to grow in glass vases of fresh water his father had been able to keep small aquatic animals alive in captivity. It subsequently occurred to him ‘to apply this principle – the supply of oxygen from living plants under the stimulus of light – to the preservation of animals in sea-water’.

Philip Gosse perfected the technique in collaboration with a chemist, Robert Warington (1807–1867), who had, quite independently, been occupied in a similar series of experiments. In early December 1852, Gosse set about building a tank in the new Fish House at the Zoological Gardens in Regent’s Park (now London Zoo) and stocked it, as Edmund Gosse recalled, with ‘about two hundred specimens of marine animals and plants brought up from Ilfracombe two months before, and still in a perfectly healthy condition.’ This prototype tank proved exceedingly popular and the Zoological Society of London ‘determined to make the newly invented aquarium a feature of the Gardens.’ 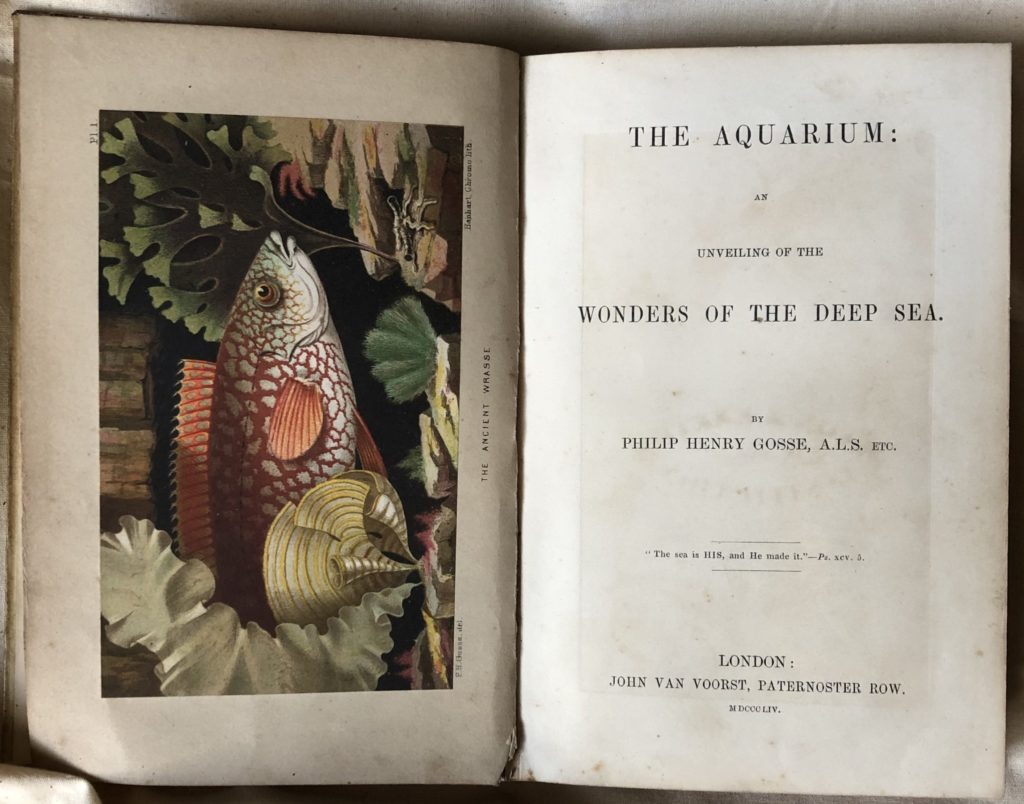 In April 1853, Gosse again travelled west, this time to Dorset, to collect specimens to send back to the Zoological Society in London.

‘His first care was to secure seaweeds, carefully selecting those which were in full health, and, by preference, the finer and cleaner varieties, firmly affixed to rocks. He became an adept in chipping off just as much of the rocky support as the roots required, and no more. To these he would add such specimens … as he found, by experience, had the best chance of surviving the journey, and these he packed, as a rule, not in water, but swathed in wrappings of wet seaweed.’

The family settled in lodgings in Weymouth. Gosse recorded his theories and practice, as well as pleasant days out at local landmarks, including Durdle’s Door; his intense observations formed the basis of his best-seller, The Aquarium : an Unveiling of the Wonders of the Deep Sea (1854). 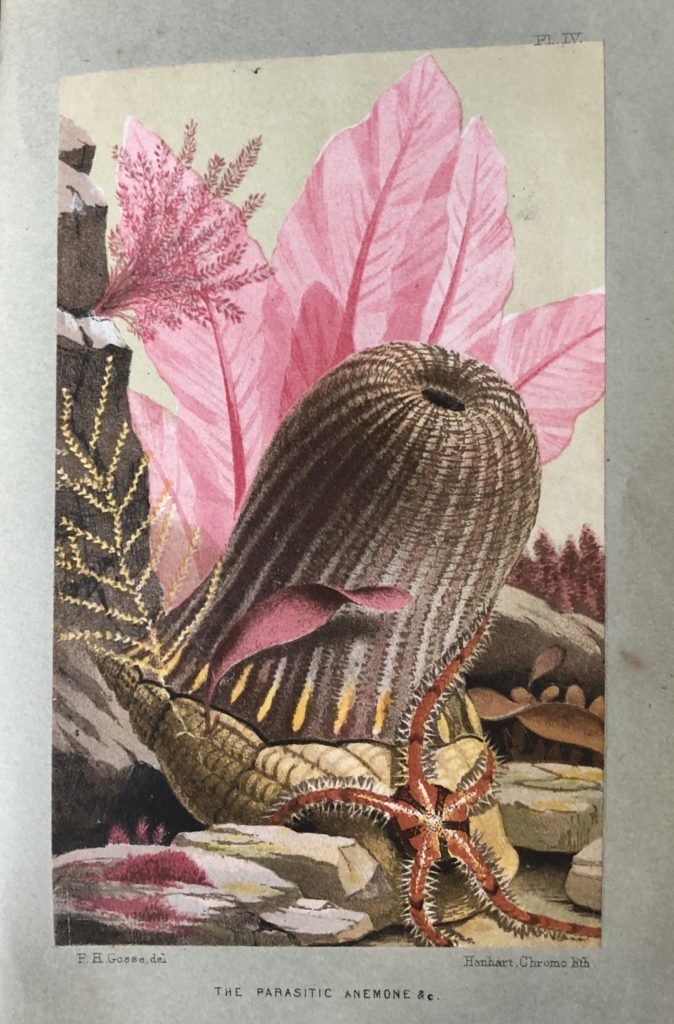 According to Edmund Gosse, The Aquarium sold ‘like wild-fire’ and although it was ‘lavishly adorned’ with twelve very expensive colour-lithographed plates, in time it made his father a profit of more than £900. Gosse claimed the plates of his drawings, made by Hanhart, were the book’s ‘principal peculiarity’:

‘I have endeavoured – in a manner hitherto, I believe, unattempted – to represent marine animals, with their beauty of form and brilliance of colour, in their proper haunts, surrounded by submarine rocks and elegant sea-weeds, as these appear when transferred to an Aquarium.’ 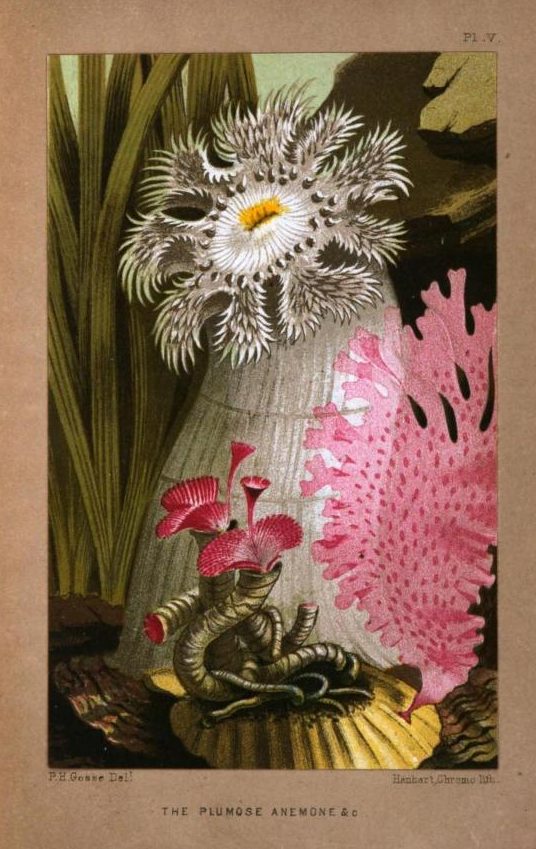 Gosse’s principal objective in writing his book was to market his invention of the marine aquarium to wealthy amateurs; in the final chapter he offers guidance on setting up an aquarium at home, including advice on the form and size of the tank, where to position it for the best light, how to maintain the water and, of course, how to ensure the health of the animals for as long as possible – ‘Death, which spares them not at the bottom of the sea, will visit them in the Aquarium’. More importantly, he beguiled his readers with exquisite descriptions of aquatic life, certain to impress any visitor:

‘… the Sea-mouse crawls restlessly to and fro … the brilliance of its changing colours will always attract admiration. Perhaps it is most beautiful by candle-light, when red and orange reflections predominate; by day, pearly greens and blues prevail. This difference is owing to the position of the light, and the angle at which it is reflected. Thus, if the eye glance along the bristles towards the light, which is reflected at an obtuse angle, the reflected rays will be lilac, passing into ultramarine; if the angle of reflection be a right angle, the rays will be green; if the light be between the observer and the animal … the reflections will take yellow, orange, scarlet, and crimson hues’.

Within a few years an ornamental marine aquarium could be found in many fashionable Victorian parlours; families gathered round to watch the live show and designs for vessels, made from glass, slate, wood and iron, became more and more elaborate, many ‘neat and pretty … for a parlour table’. 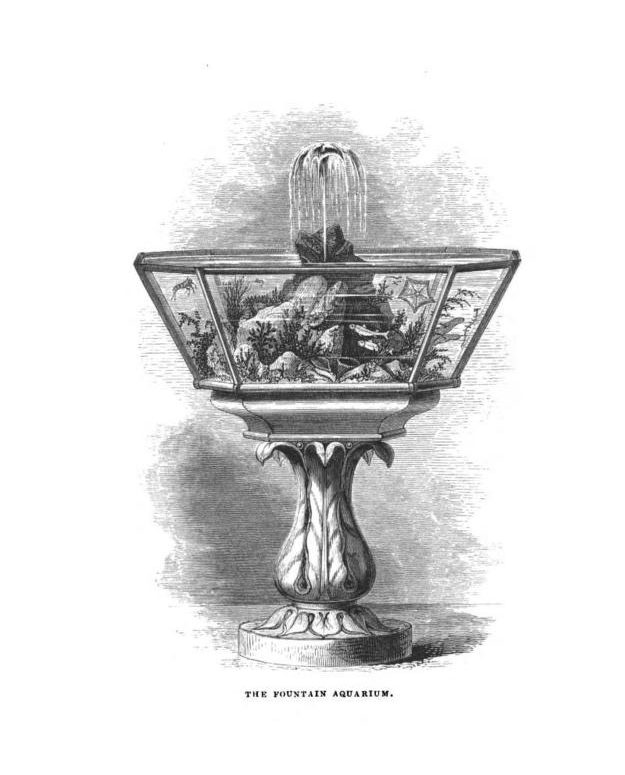 Gosse went on to publish a sequel, A Handbook to the Marine Aquarium, and in 1856 was elected Fellow of the Royal Society. An obituary notice in the Proceedings of the Royal Society in 1889 claimed that he was, ‘not only a many-sided and experienced naturalist, but one who did more than all his scientific contemporaries to popularize the study of natural objects’.

The Devon and Exeter Institution has an important collection of works on natural history and marine biology, including Gosse’s major publications. From its foundation in 1813 the Institution collected artefacts as well as books, including specimens of seaweeds, many collected by local women. Seaweed-collecting was fashionable long before Philip Henry Gosse discovered that seaweed could provide oxygen for marine creatures in an Aquarium; as a child, Queen Victoria had collected and preserved an album of seaweeds.  Many of the Institution’s artefacts, including its natural history specimens, were transferred to the Royal Albert Memorial Museum, which officially opened in August 1869, and can be seen there alongside a large collection of Gosse’s original watercolours and sketches.

Gosse, Philip Henry, The Aquarium: an Unveiling of the Wonders of the Deep Sea (1854) is available online here: https://archive.org/details/bub_gb_lgDbAAAAMAAJ/page/n5/mode/2up

Posted in Book of the month, Library Collections by Sonia Llewellyn on April 5th, 2020.