Home What’s on Picturing the Jabberwock

An online gallery of creative responses from our Bookworms, created during Lockdown 2020

‘Jabberwocky’ is a nonsense poem by Charles Lutwidge Dodgson (1832-1898), better known as Lewis Carroll, a gifted Oxford mathematician and author of the classic children’s books, Alice’s Adventures in Wonderland (1865) and Through the Looking-Glass, and What Alice Found There (1871).

Dodgson conceived ‘Jabberwocky’ in 1855 in Mischmasch, a home-made magazine of poems and drawings to amuse his family and friends. He started writing for children in earnest when he met the daughters of his friend, Henry Liddell, Dean of Christ Church College. On 4 July 1862 he set out on a boating expedition with the three girls, Lorina, Edith and Alice, and to pass the time he invented a story about a girl called Alice who falls down a rabbit hole. Two years later Dodgson presented Alice Liddell with an illustrated manuscript of the story; meanwhile he reworked it for publication with illustrations by the Punch cartoonist, John Tenniel (1820-1914). In 1871 Dodgson extended his early poem, ‘Jabberwocky’, and incorporated it in the first chapter of his sequel, Through the Looking-Glass.

The poem tells of a fierce monster, the Jabberwock, with ‘jaws that bite’ and ‘claws that catch’. A father warns his son, ‘Beware the Jabberwock’ but the boy kills the monster with his sword in hand, ‘snicker-snack’, and carries home its head. The characters that Alice encounters in Wonderland, and subsequently in the mirror world of Through the Looking-Glass, baffle her with silly instructions, reasoning and poems. Alice, a very sensible child, responds with logic. Flicking through a book lying on a table, Alice discovers the poem ‘Jabberwocky’ but at first cannot read it. Eventually she is struck by a ‘bright thought’: it’s a ‘Looking-glass book’ and if she holds it up to a mirror ‘the words will all go the right way again’. Keen to understand the poem, she later asks Humpty Dumpty:

‘You seem very clever at explaining words, Sir,’ said Alice. ‘Would you kindly tell me the meaning of the poem called “Jabberwocky”?’

Humpty Dumpty isn’t much help. So, on 28 March 2020 we ran our first online poetry workshop and asked children if they could make sense of the nonsense poem and have a go at drawing the Jabberwock. Here are some of their brilliant pictures of the monster – we wouldn’t want to meet them in a dark ‘tulgey’ wood!

If you would like a link to the poems to read together, a copy of all the worksheets from the workshop, or would like to add your own drawing to the gallery, please email: [email protected]. 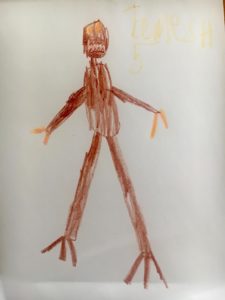 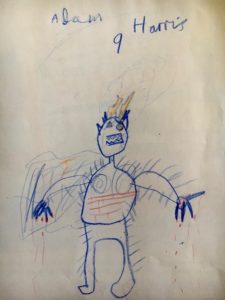 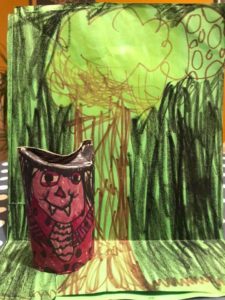 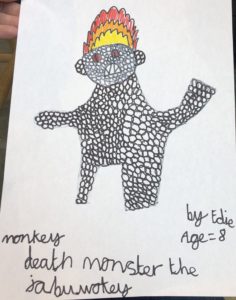 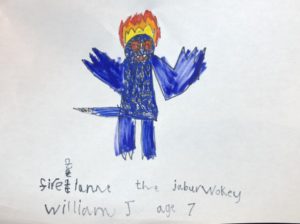 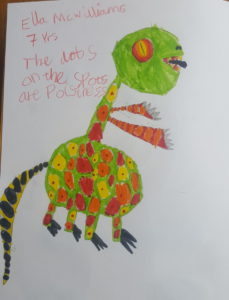 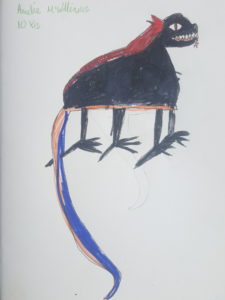 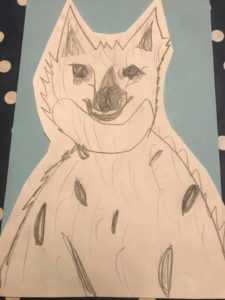 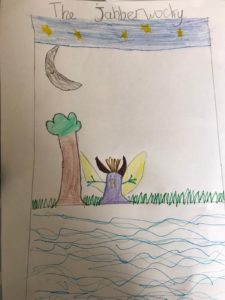 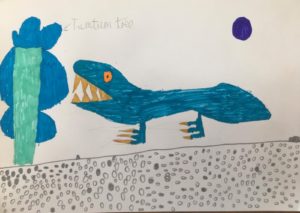 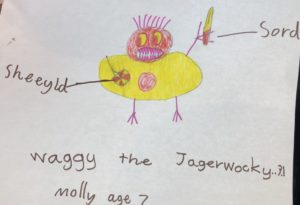 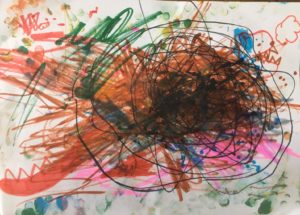 Posted in Displays, Exhibitions and Residencies, Workshops and Events by Sonia Llewellyn on April 8th, 2020.