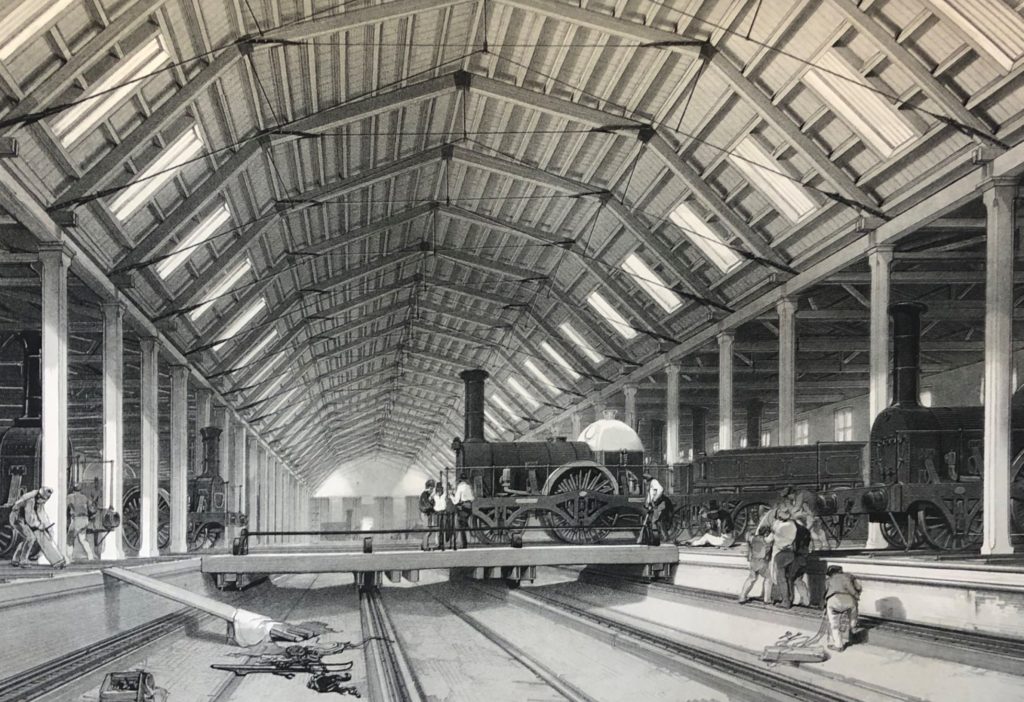 His engravings are evidence of the huge impact of the railways on the English landscape. Charles Dickens lived near Euston station and describes its construction in Dombey and Son (1848):

Traces of its course were visible on every side. Houses were knocked down; streets broken through and stopped; deep pits and trenches dug in the ground; enormous heaps of earth and clay thrown up … fragments of unfinished walls and arches and piles of scaffolding, and wildernesses of bricks … In short, the yet unfinished and unopened Railroad was in progress; and, from the very core of all this dire disorder, trailed smoothly away, upon its mighty course of civilisation and improvement.

However, Bourne evidently saw beauty amidst the chaos. One reviewer described his lithographs as ‘likely to gratify both the lover of the picturesque and the man of science: the former, by variety of lines and combinations; and the latter, by different modes of application of machinery, mechanism, and manual labour’. 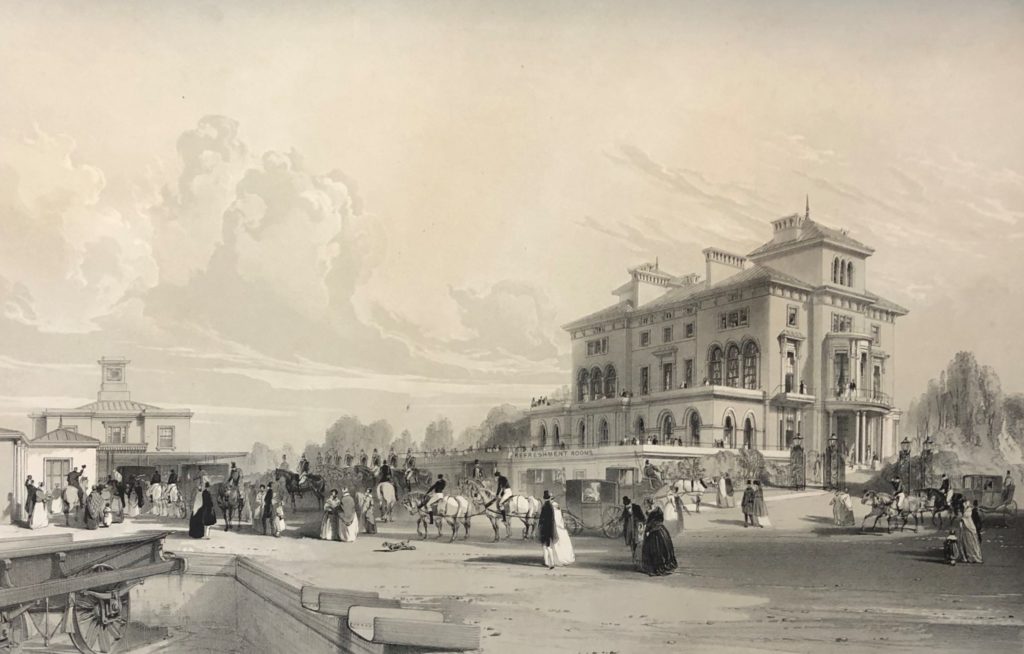 On 4 June 1838 the first trains travelled along the Great Western Railway from London towards the West Country. Isambard Kingdom Brunel’s broad-gauge line, known as the Holiday Line, would eventually transport Londoners to the seaside as far as St Ives but it had been built primarily to connect Bristol merchants with the capital. (The London to Liverpool line was also under construction in the 1830s and threatened Bristol’s status as the country’s second port).

‘Five years ago no man had ever travelled from London to Bristol, even by the mail, in much less than twelve hours; upon the opening of the railway the distance was performed in four hours; and, more recently, parts of the road have been travelled over at a speed of fifty and sixty miles in the hour.’ 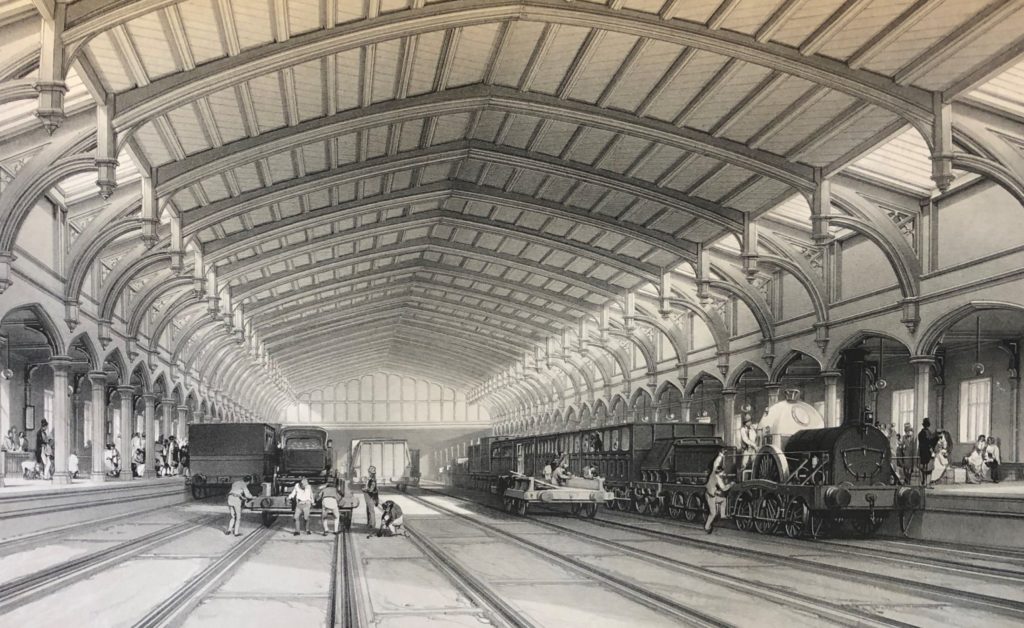 The Bristol and Exeter Railway company, which would eventually amalgamate with the Great Western Railway company, opened its first section from Bristol to Bridgwater on 14 June 1841. Bridgwater to Taunton opened on 1 July 1842; Taunton to Beam Bridge on 1 May 1843; and Beam Bridge to Exeter St David’s on 1 May 1844. The entire line from the London terminus in Paddington to Exeter was longer than any other line at the time. 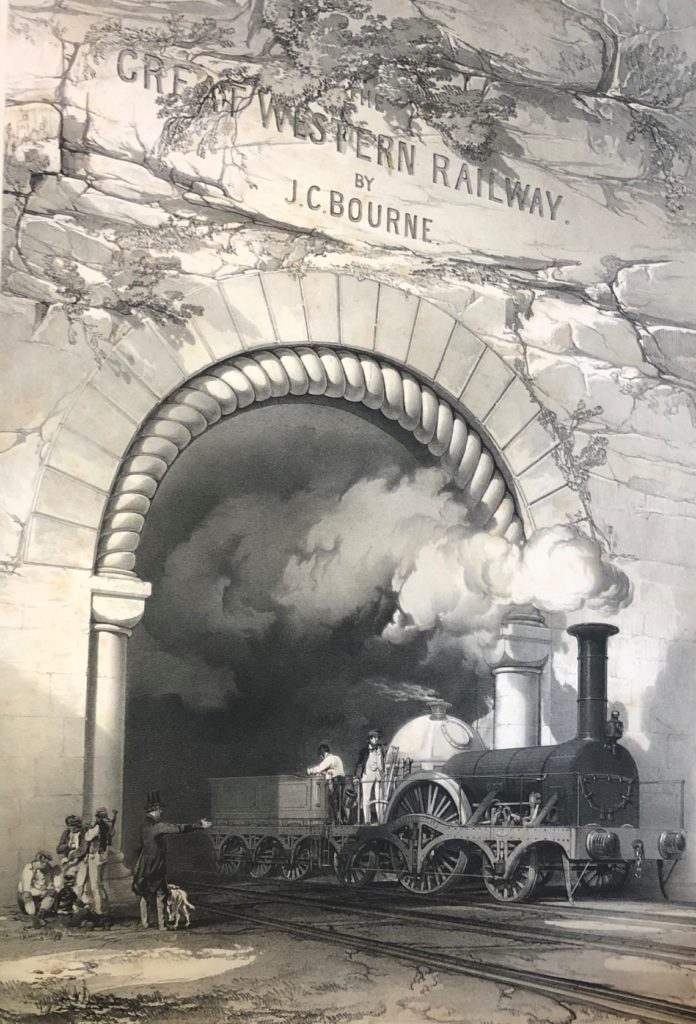 Bourne’s magnificent lithographs of the Great Western Railway were published in 1843 by Tilt & Bogue with text by George Thomas Clark (1809–1898). They are considered more artistic than those of the London and Birmingham Railway and emphasise the beauty of the art and design of the railway’s infrastructure:

‘whilst purely architectural structures are placed in open thoroughfares, or places of public resort, the engineering works of a road or railway stand commonly in some remote district, crossing some secluded valley, or piercing some barren hill. The traveller, indeed, upon a common road, is almost always able, from his comparatively slow progress and from the turnings and windings of the way, to obtain a tolerable view of any great work along its course; but the straightness of a railway, and the rapidity of the motion upon it, entirely shut out its far greater and more numerous works, and thus some of the most magnificent structures in the kingdom, though crossed daily by thousands, are actually seen by few. The present publication is intended, in some degree, to supply this defect with regard to the Great Western Railway. With this intention views are given of all its principal works, of the chief stations and works accessory to it, and of the manner of its approach to the borough towns of Windsor and Reading, and the cities of Bath and Bristol. In selecting these views care has been taken to give in the first place a correct representation of each work of art, and in the second place to combine with this, as far as was practicable, the natural features of the landscape. It is thus hoped that drawings sufficiently correct for the purposes of the engineer or the architect will please also the general lovers of the picturesque’.

Only in 1850 did the Great Western Railway company commission Brunel to design a permanent terminus in Paddington; the great structure of wrought iron and glass, inspired by the Great Exhibition’s crystal palace, opened in 1854 and, for a while at least, was the largest train shed roof in the world.

Looking for a birthday or wedding gift for the book lover in your life? Why not adopt a book in their name? This s… https://t.co/ioQuTZQijW
27 June 2022

Our print of the month is Mr and Mrs Rowe's Entrance to the Valley of Rocks, Linton [sic]. This dramatic Exmoor for… https://t.co/KByQdqPuPa
21 June 2022

Bookplates, or 'ex libris', are small labels pasted into the front of books to indicate ownership. Often beautiful… https://t.co/B0a2m9cPqF
20 June 2022