Successful sea navigation relies on being able to determine latitude (how far north or south you are) and longitude (how far east or west). When the Greenwich Royal Observatory was founded on 22 June 1675, sailors were able to measure latitude at sea by observing the altitude of the sun at its highest point at midday, but once out of sight of land they had no easy means of determining longitude. For centuries, sailors used 'dead reckoning' - an estimation of where you are based on where you were, taking into account speed and course. Such wild guesswork inevitably resulted in tragedy; the Royal Observatory was tasked with finding a solution to the longitude problem.

Imagine it is 1675 and you have embarked on a sea voyage on a westerly course. Since each 15 degrees of longitude is equivalent to a difference in time of one hour you decide that you can work out how far west you have travelled by noting, at any given moment, the difference between the local time on board your ship and the time at your place of departure – let’s say Plymouth, for the sake of argument. Determining the local time on board the ship is relatively straightforward if you know how to observe the sun and the stars. But how are you going to determine what time it is back home in Plymouth? The answer seems simple – you bring a clock on board and keep it set to the local time in Plymouth. However, before long you realise that your pendulum clock does not swing regularly on board a ship under sail, even in mild conditions, and at times it appears to stop working altogether. Pretty soon, you are lost.

The marine chronometer
John Harrison (1693–1776), a Yorkshire clockmaker, believed the solution to the longitude problem was to invent a clock – a marine chronometer – that would keep accurate time at sea. His fourth model (H4, held by Royal Museums Greenwich) was a sort of portable pocket watch; the clock underwent rigorous testing on a voyage to Barbados and was found to work. Today, Harrison is often referred to as the person who solved the longitude problem. His story featured in a bestselling book and a Channel 4 television series, ‘Longitude’, starring Michael Gambon and Jeremy Irons. (Annoyingly it doesn’t appear to be available anywhere now except on YouTube.)

However, Harrison’s clock was rather expensive and one clock was of little use for the entire Royal Navy. Eventually, another clockmaker, Thomas Earnshaw (1749–1829), would devise a marine chronometer for general use. Between 1831 and 1836, HMS Beagle used Earnshaw’s chronometer no. 506 on a voyage to circumnavigate the world to chart, for the first time, points of longitude. Charles Darwin (1809-1882), aged just twenty-two, accompanied the voyage and his journal of The voyage of the Beagle was published in 1839. (An Earnshaw chronometer no. 506 is held at the British Museum.)

The lunar-distance method
Of course, John Harrison was not the only person to tackle the longitude problem and there was more than one solution. In the 16th century, Johann Werner (1468–1522) had suggested using the moon as an astronomical clock. Every hour, the moon moves the distance of about its own diameter. If you plot the position of the moon against a backdrop of ‘fixed’ stars and consult pre-determined tables of measurements of the moon’s orbit you can, in theory, determine your longitude. Without a telescope, however, Werner could only look at the moon and wonder but the inventions of the Age of Enlightenment would soon pave the way for the so-called lunar-distance method to become a real contender in the race to solve the longitude problem.

The first Astronomer Royal, John Flamsteed (1646–1719), realised that a longitude solution based on the position of the moon required the ability not only to take accurate and consistent measurements of the positions of the sun, moon, stars and planets but also to predict their positions over a long period of time. In 1725 his catalogue of nearly three thousand stars was published, titled Historia coelestis Britannica. In 1753, Tobias Mayer (1723-1762), a German astronomer, became the first to produce a set of tables of measurements of lunar distances that could be used by sailors at sea to measure longitude. However, the method to determine longitude using lunar-distance tables was extremely complex and time-consuming. Even expert astronomers took four hours to complete the calculations – at sea, knowing where you were four hours ago isn’t terribly helpful.

The lunar-distance method became feasible when a subsequent Astronomer Royal, Nevil Maskelyne (1732–1811), published the first Nautical almanac in 1766 which contained tables showing the predicted position of the moon relative to nearby stars at three-hour intervals of Greenwich time during 1767. Sailors no longer had to spend hours at complex mathematical calculations. The Nautical almanac sold in large numbers, including overseas, and soon sailors all over the world were determining their longitude from the time at Greenwich.  When the International Meridian Conference met in 1884 to agree a Prime Meridian for the world it made sense to use Greenwich time. 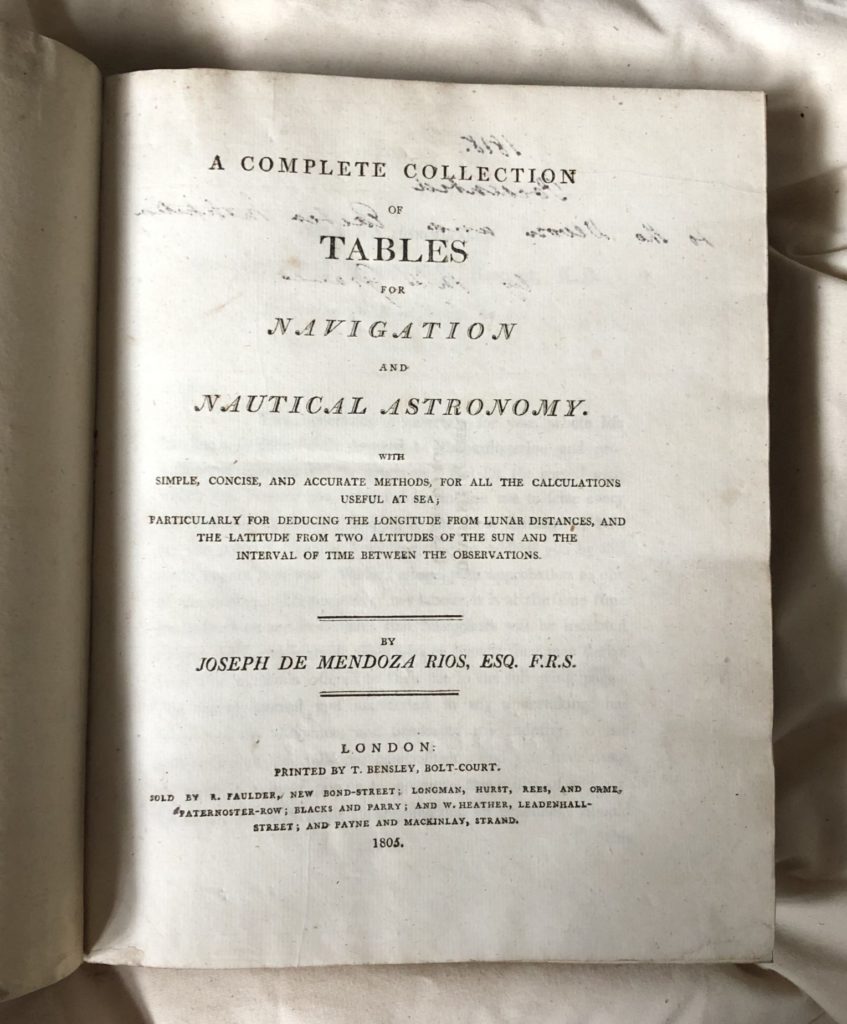 Joseph de Mendoza y Ríos (1761–1816)
Joseph de Mendoza y Ríos was a Spanish astronomer and mathematician and a naval seaman. Persistent ill health caused him to retire early from the Spanish Navy but he pursued an alternative career as a naval scientist and published a treatise on navigation in 1787. He became known throughout Europe and corresponded with international scientists, including Sir Joseph Banks (1743–1820), President of the Royal Society.

Mendoza y Ríos eventually moved to London where he was elected a Fellow of the Royal Society in 1793. He became interested in the use of mathematical tables to aid navigation and worked to refine them. Following the publication of a paper in the Philosophical Transactions of the Royal Society, he secured funds to publish his new calculations. He hoped his book, A complete collection of tables for navigation and nautical astronomy with simple, concise, and accurate methods, for all the calculations useful at sea; particularly for deducing the longitude from lunar distances, and the latitude from two altitudes of the sun and the interval of time between the observations (1801), would prove an ‘essential service to the cause of navigation’. In fact, his tables reduced the time taken to calculate longitude at sea from lunar distance to just a few minutes. 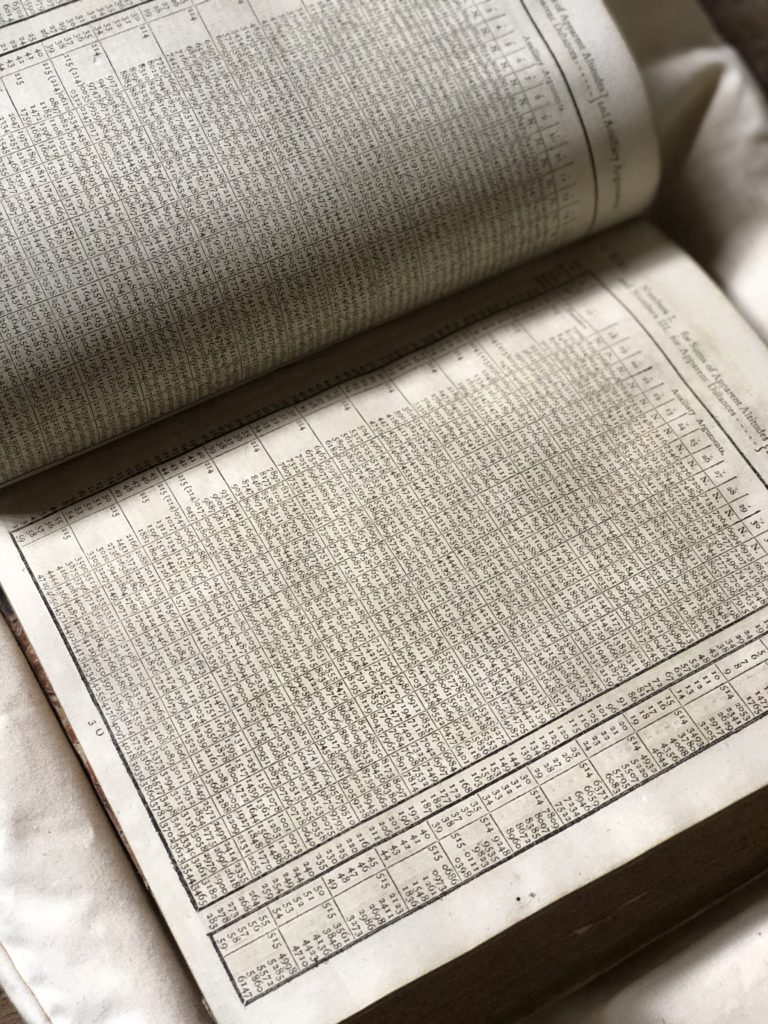 Of course, to determine longitude using the lunar-distance method, sailors had to be able to measure the position of the moon. In 1731 John Hadley (1682-1744), had invented the reflecting quadrant – the first scientific instrument to facilitate the lunar-distance method. In 1757, Captain James Campbell (1720–1790) designed the sextant and had it made two years later by the instrument-maker, John Bird (1709–1776). Full-circle instruments, or reflecting circles, were also in use. Tobias Mayer had invented one and presented it to the Board of Longitude; it was further improved by Jean-Charles de Borda (1733–1799), a French mathematician. In 1801, Mendoza y Ríos published an improvement on Borda’s design in a paper for the Philosophical Transactions of the Royal Society; he intended his reflecting circle to be used with his Complete collection of tables for navigation and nautical astronomy.

From 1840 the lunar-distance method was replaced by cheaper marine chronometers and eventually wireless technology. The Nautical almanac, used by sailors to calculate lunar distances from 1767, ceased publication in 1906. Today, sailors navigate using GPS but in the last five years the Royal Navy and US Navy have reinstated compulsory training in celestial navigation amid fears that computer navigation systems could be hacked and most ocean yachtsmen still carry a back-up marine chronometer and sextant … just in case.

The full-text of Mendoza y Ríos’s Complete collection of tables for navigation and nautical astronomy is available online.