John Smeaton’s life overlapped that of Mozart (1756–1791); he was preceded by Robert Hooke, Christopher Wren and Isaac Newton in the 17th century and was followed by Isambard Brunel, Thomas Telford and Robert Stephenson in the 19th century. Smeaton is justly famous as an engineer and deserves to be remembered alongside other great names in science and engineering. His father was a lawyer, but John became more interested in the workings of machines such as steam engines and water mills. He grew up to be a blunt and practical Yorkshireman.

Rather like Robert Hooke a century before, Smeaton spent his early working years making scientific instruments; he developed a practical interest in the mechanics of water and windmills. In 1753, at the age of 29, he was invited by Lord Cavendish to become a Fellow of the Royal Society. There he made the professional contacts and gained the reputation that led to the invitation to design and construct a new lighthouse on the treacherous Eddystone Rock (probably his first major “civil” engineering project). The name of this rock is believed to derive from the associated eddy currents that are created in the surrounding sea.

By any standards Smeaton’s lighthouse was a very successful construction, completed in 1759, and lasting in service for about 120 years. Smeaton went on to design mills, canals, harbours, bridges etc., and cofounded the Society of Civil Engineers (which started as a fortnightly dining club), the precursor of the present-day Institution of Civil Engineers founded in 1818. 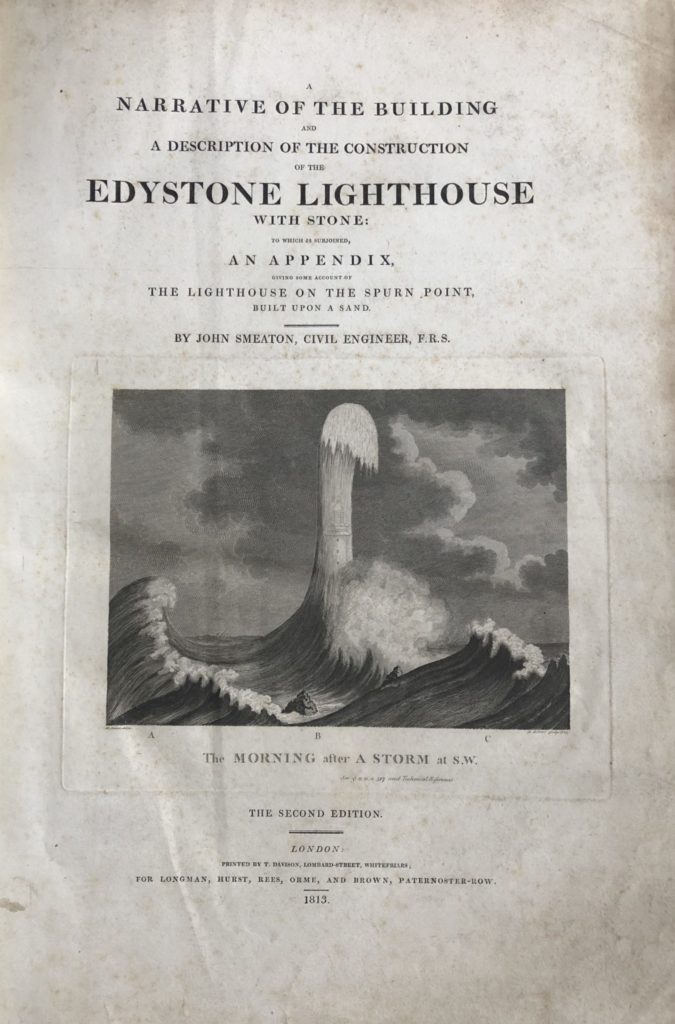 Smeaton was asked by Trinity House to write an account of the construction of the lighthouse ‘so that in the event of the destruction of the present edifice, they could discover the errors and imperfections’. This took some 35 years, with the first edition being published in 1791 – A Narrative of the Building and a Description of the Construction of the Edystone Lighthouse. An 1813 edition is in the library of the Devon and Exeter Institution.

As he admits in the book, Smeaton was much more at home with mechanics and practical design and construction than with writing!

‘I have it not in my power to present … a fine piece of writing, or of drawing; neither literature, not the fine arts, having been much the objects of my study; but I humbly submit … a plain account of the construction of a plain and simple building, that has nevertheless been acknowledged to be, in itself, curious, difficult, and useful; and as such, I trust, worthy of observation.’

The first print run soon proved to be inadequate for the demand, and a second printing appeared in 1793, the year after Smeaton’s death.

The book starts with a dedication to King George III; then follows a very comprehensive description, not only of Smeaton’s lighthouse but also of the two preceding ones by Henry Winstanley and John Rudyerd. The design and construction of Smeaton’s lighthouse evolved over about three years and is described in great detail in the form of a logbook – a highly important type of document still used by engineers today. 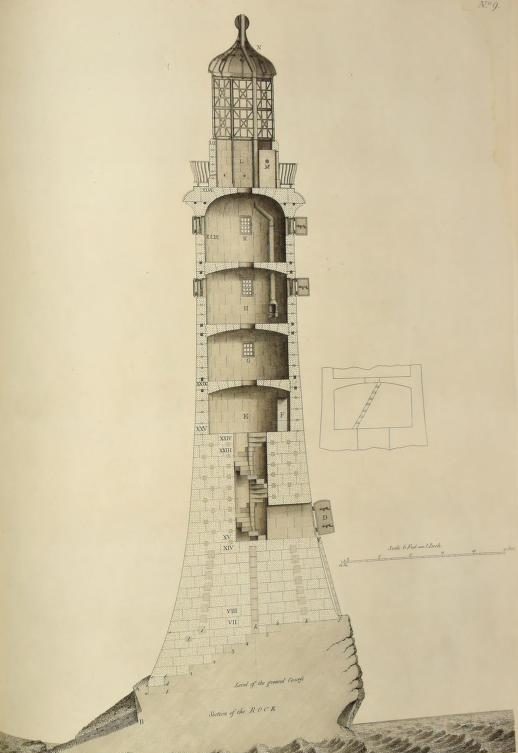 Section of the Eddystone Lighthouse

Innovative features of the lighthouse included:
• The tapered shape – to provide stability and reduce wind loads;
• Dovetailed masonry and the development of a hydraulic cement that would set under water;
• Prestressing with iron bars around the circumference, said to be inspired by Wren’s design of St Paul’s Cathedral.

Horizontal and vertical sections of the lantern

Smeaton tells a story in the book that highlights an unusual risk taken by the workmen building Rudyerd’s lighthouse – and the rather enlightened response of the King of France:

‘Lewis the XIV (Louis 14th), being at war with England, during the proceeding with this building, a French privateer took the men at work upon the Edystone rock, together with their tools, and carried them to France; and the captain was in expectation of a reward for the achievement. While the captives lay in prison, the transaction reached the ears of that monarch: He immediately ordered them to be released, and the captors to be put in their place; declaring that though he was at war with England, he was not at war with mankind; he therefore directed the men to be sent back to their work with presents; observing that the Edystone Lighthouse was so situated, as to be of equal service to all nations having occasion to navigate the channel that divides France from England.’

It seems appropriate in these times of self-isolation to remember the lives of lighthouse keepers in the 18th and 19th centuries before the days of ‘instant’ communication. By Smeaton’s time it had become normal practice to engage three keepers on a lighthouse. In this case, in the event of injury or death of one, the other ones could account for the circumstances with less risk of being prosecuted for a felony. Even so it must have been a lonely life requiring strength of character, self-sufficiency and dedication to the protection of other lives at sea, with no certainty of aid should it be needed.

I am a semi-retired structural engineer, with most of my working life having been spent in academia in Exeter, after some seven years in London working for a consulting engineering company. The nice thing about an academic life is that research interests can continue as a hobby after retirement! All I need is my laptop, skype, and I am able to collaborate with my colleagues.

I’ve been a volunteer in the DEI Library for some 15 months, and I continue to find real gems on the shelves just crying out for attention. So I have made many new friends – both in human and book forms.

The full text of Smeaton’s narrative and description of the Eddystone Lighthouse can be read here.

Posted in Book of the month, Library Collections by Sonia Llewellyn on April 25th, 2020.