Francis Stevens (1781-1823) and the Devon and Exeter Institution

The South West Collection includes many rare items that shed light on the history of our region.  This lovely pocket sketchbook, bound in leather with a brass clasp, contains pencil sketches and notes by the landscape artist, etcher and drawing master, Francis Stevens (1781-1823).

Francis Stevens was born, probably in Exeter, on 21 November 1781 and returned to the city in 1817. He is best known for his watercolour drawings of landscapes and rustic cottages. He was tutored by the renowned artist, Paul Sandby Munn (1773-1845), and exhibited at the Royal Academy in 1804 and 1805. In 1808 he helped establish the London-based Sketching Society; he became a member of the Watercolour Society in 1809.

Stevens died in 1823 before he could complete his planned illustrative work of Exeter and its vicinity, but Frederick Christian Lewis (1779-1856) etched some of Stevens’ drawings for his Devonshire river scenery series, published between 1821 and 1843.  The volume on the scenery of the River Exe appeared in 1827, dedicated to Sir Thomas Dyke Acland (1794-1871); it contains a number of Stevens’ views of Exeter and the quay, including a sketch of the canal basin looking across to the Cathedral and Colleton Crescent in the distance, and another of the old quay bridge from the opposite direction with several tall ships on the quayside. 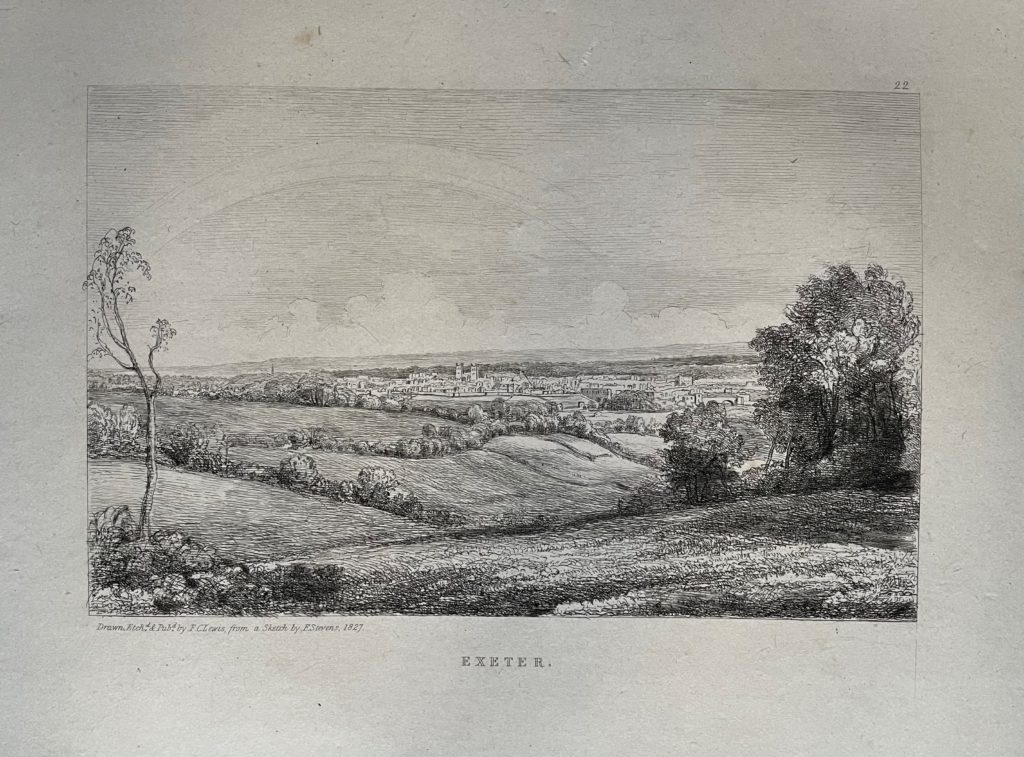 Stevens was an early benefactor of the Devon and Exeter Institution. He donated a copy of his Views of Cottages and Farm-houses in England and Wales (1815) and requested that it should not to be borrowed or removed from the Library. 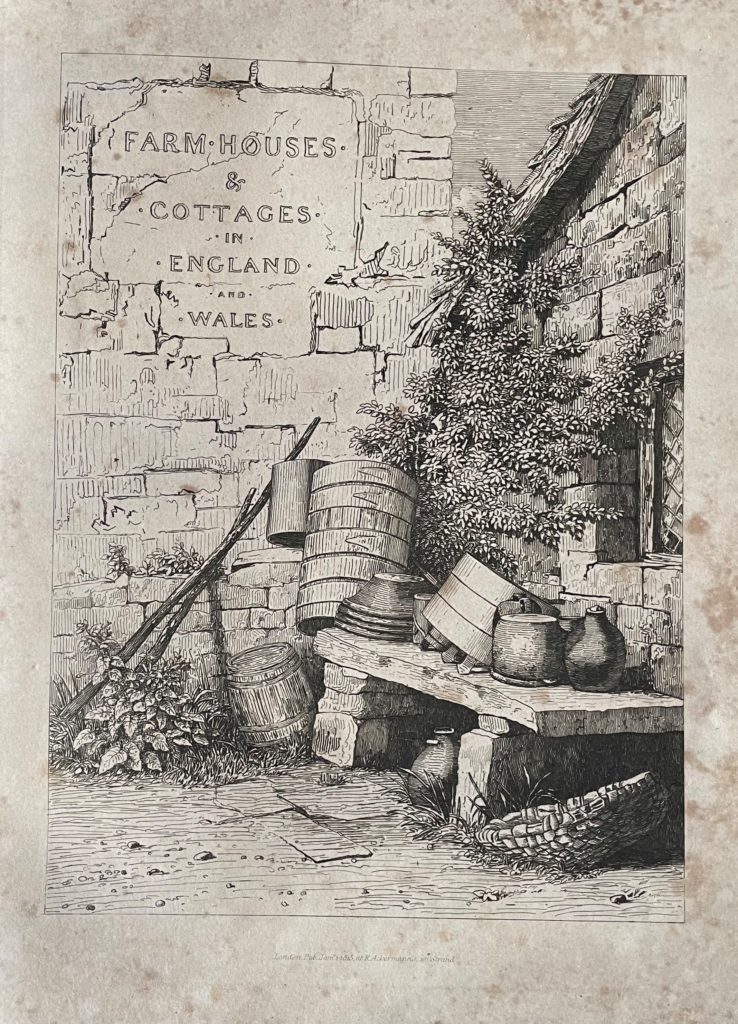 Few subjects afford more rural features for the canvas than the homestead attached to a humble farm…  Devonshire, in many parts, abounds with stone, in the vicinity of which the cottages and farm-houses are built with that material.  The chimnies [sic] to these houses have a peculiar character, being divided towards the top by large slates, horizontally placed.  It is probable, that in some of the villages in this, as well as in the adjoining county, Cornwall, the houses are of very ancient date, and perhaps afford specimens of buildings of this class as old as any in the island. 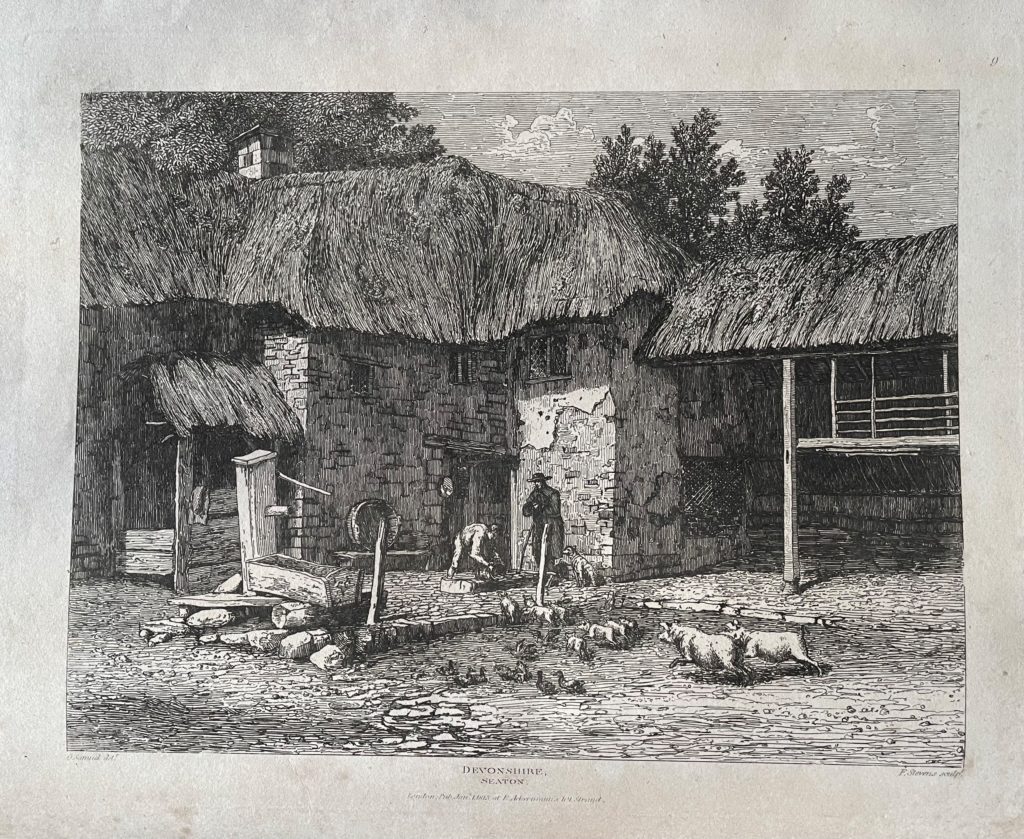 Stevens also presented his magnificent landscape painting of Lustleigh Cleve to the Institution; today it hangs above the fireplace in the Outer Library.  Lustleigh Cleve is situated in Dartmoor National Park, between the village of Manaton and Lustleigh; Stevens described it in his sketchbook, alongside a pencil sketch of a similar view:

Went from Moreton to Lustleigh Cleve; found it much more beautiful than the description given to me.  The day was remarkably fine for effects & the colouring good & mellow… Lustleigh Cleve is one of the places strangers ought to see when they visit Devonshire.  The whole valley from North Bovey is worth exploring … 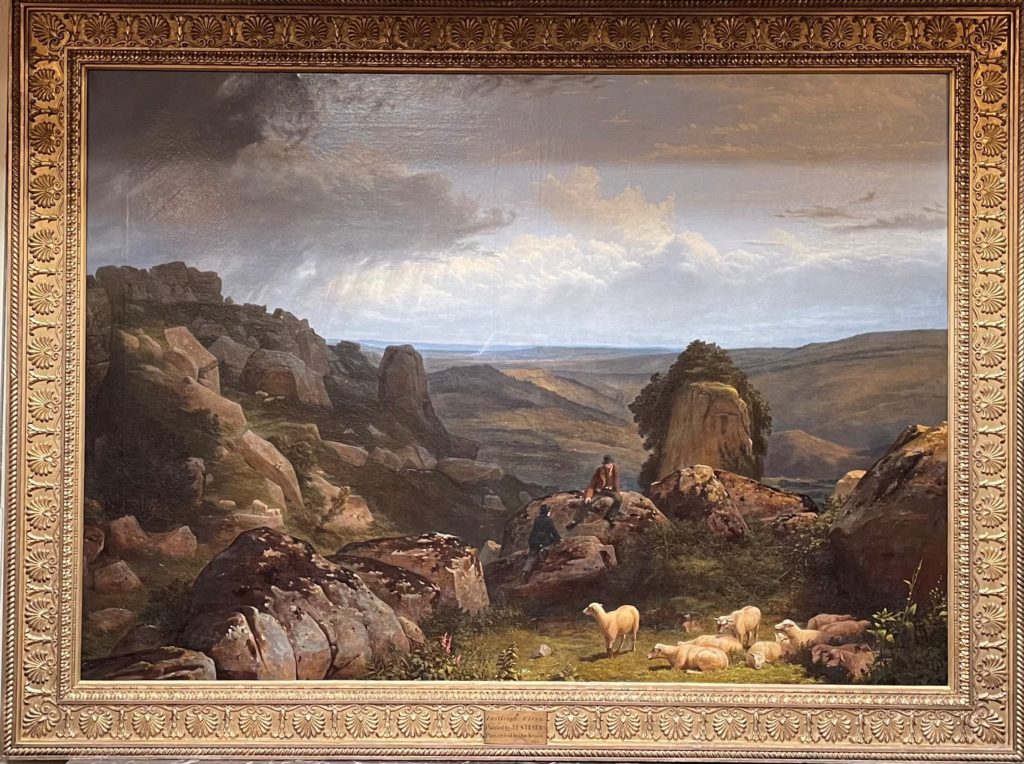 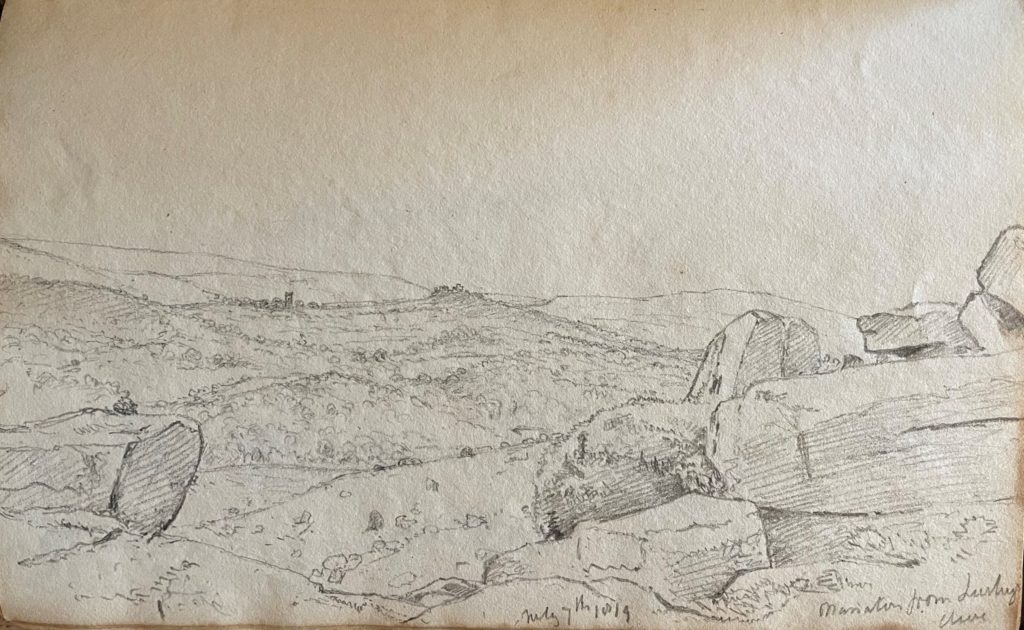 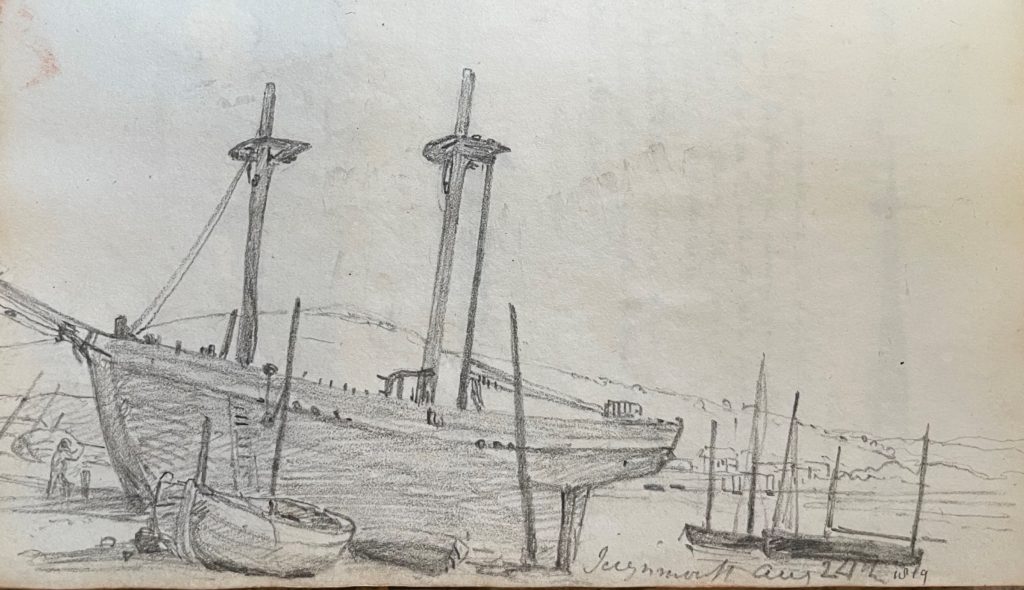 Stevens’ pocket sketchbook was purchased by Sir Thomas Dyke Acland at the sale of Stevens’ estate.   Acland subsequently donated the sketchbook to the Devon and Exeter Institution. 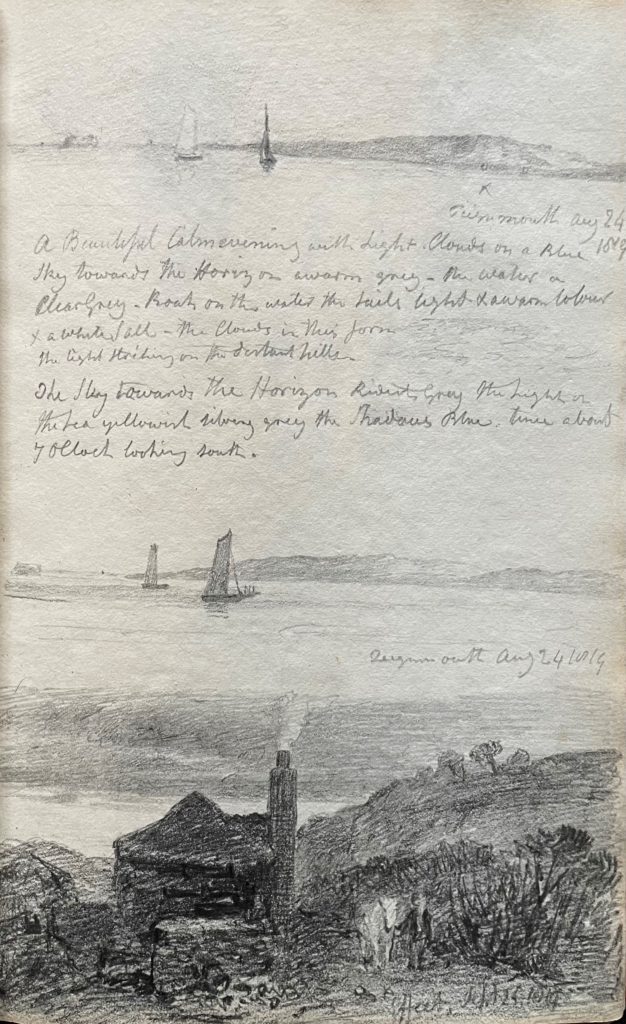 The sketchbook contains rough pencil drawings of West Country landscapes, dated from 23 June 1819 to 24 July 1823, with accompanying observations on light and colour – probably intended as an aide memoire:

A beautiful calm evening with light clouds on a blue sky towards the horizon & warm grey – the water a clear grey.  Boats on the water the sails light & warm colour & white sail.  The clouds in this form [sketch].  The light striking on the distant hills… The light on the sea yellowish silvery grey. The shadows blue since about 7 o’clock looking south.  (Teignmouth,  24 August 1819)

The Institution has a large collection of West Country prints and drawings and we are making them accessible to a wider audience through preservation and digitisation.  To find out more, visit our Collections Explorer:  Devon and Exeter Institution

Director of Collections and Research 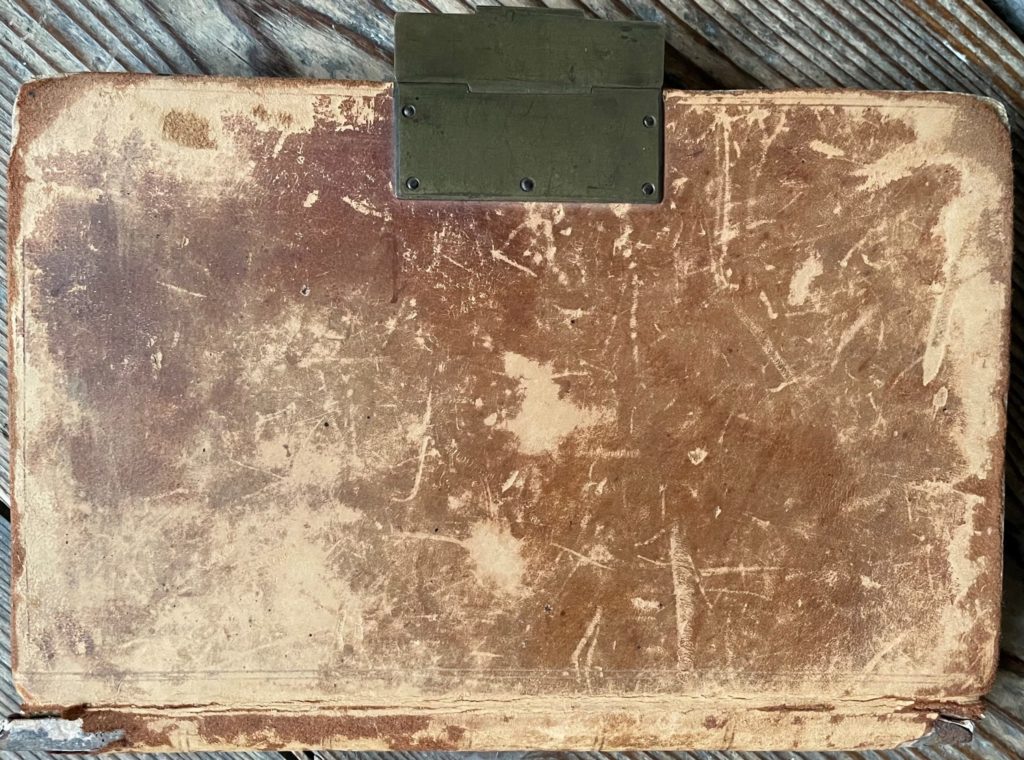 Posted in Book of the month by Sonia Llewellyn on November 2nd, 2021.